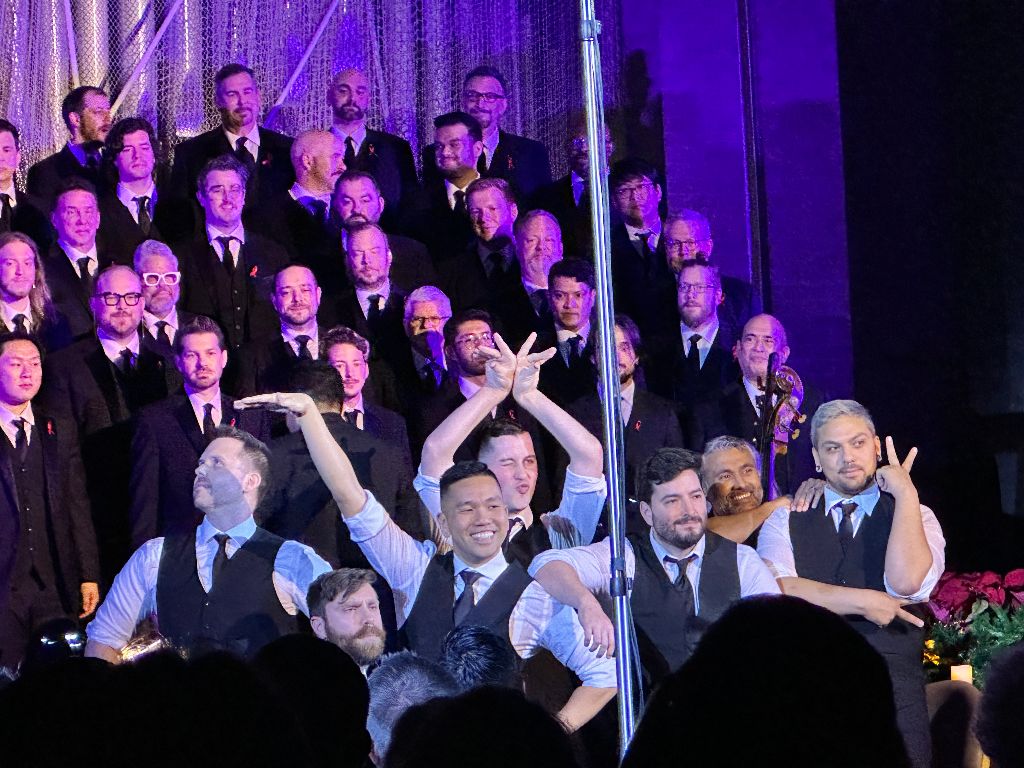 The Austin Gay Men’s Chorus delivered a heartfelt Christmas performance this past weekend. The camaraderie of the guys was evident as they sang 20 tunes ranging from traditional to campy. 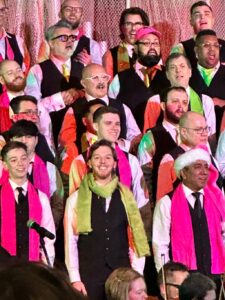 Selections were unusual, and reflected diversity. The opener was the tribal Bele Mama, a traditional folk song from Cameroon. Jingle Bells was followed by Sing We Now Noel, a carol from the French canon. A delight as it is rarely heard in the U.S. This was followed by Bashana Haba’ah (a Hebrew song), and a Basque lullaby, A la Puerta. I found both quite somber. Off to the UK, we heard the Welsh carol Deck the Halls (with its famous lyrics about gay apparel) and then Silent Night sung by a subset of 12 men. Very fine interpretations.

Little Town of Bethlehem was delivered in a slow and measured style that veered close to sleep-inducing, but the lively Shepherd’s Spiritual immediately following jolted one awake as several of guys donned a bit of clothing to look like sheep. Cute! The first half concluded with Merry Everything  and Sleigh Ride. The former is popular with gay choruses; the San Francisco Gay Men’s Chorus did it in 2020 as a virtual performance that you see on YouTube: https://www.youtube.com/watch?v=Nk50iRR2VPg

The second half began with a tune that most people have not likely heard: Bells, Bows, Gifts, Trees (song and lyrics by Todrick Hall composed in 2020). To make it very gay, the performance featured a drag queen dressed like Santa. The Jose Feliciano chestnut Feliz Navidad was given a fine rendition, and was followed by two more unusual selections: A Million Dreams and Dreidel, Dreidel, Dreidel. (A dreidel is a spinning top which has Hebrew letters inscribed on each side). The highlight song was surely 12 Days of Christmas, which was deconstructed and mixed with other tunes in a hilarious and novel way. Certainly the most innovative of the songs, performed to the delight of the audience.

The concert concluded with the ultimate Scottish song, Auld Land Syne (usually reserved for New Years’), Over the Rainbow, Born This Way (where the chorus was able to let loose), Jingle Bells and One Voice, made famous by Barry Manilow. All very evocative, although not the typical tunes for a Christmas outing. 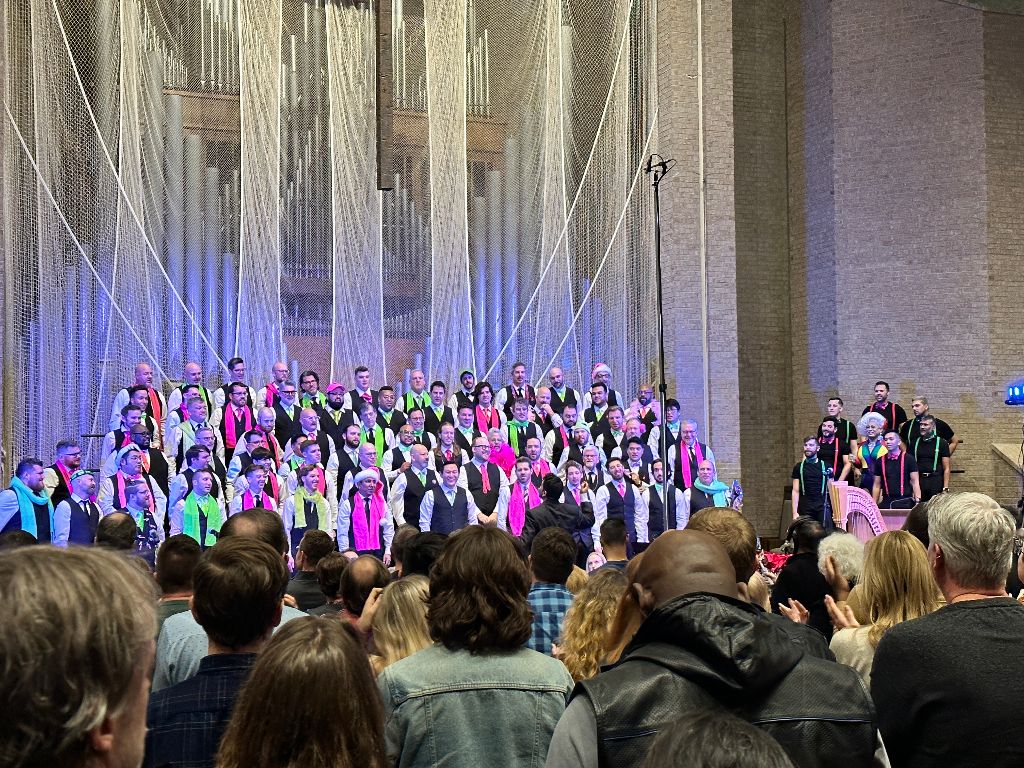 To fully appreciate a concert, one needs really fine acoustics, and the Austin Baptist church at 9th and Trinity just isn’t up to the mark. It was also used for the Texas Book Festival a few weeks ago, with similar sound issues. There were many spoken words during the concert, but many could not understand what was being said. My hearing is perfect and I missed a lot from one of the more expensive seats. It was like Rudolph was sitting on the microphone.  The two guests I had with me likewise found the spoken sound quite muddled, and while the singing was not delivered with sparkling clarity it was at least OK. I suggest not using the mics for speech: just project! Also, risers would benefit those who sit even a few rows back as the choreography is impossible to appreciate when the lower half of a person is not visible. A roving video camera that sends the image to a screen that can be seen by all would also give individual singers the attention they deserve: I’m ready for my closeup, Mr. DeMille! These small changes would raise the professional level of the chorus and better present their obvious dedication to the craft. This is a talented group of guys, and they deserve better, so by all means consider a donation at their website (printed below) to help make it happen. 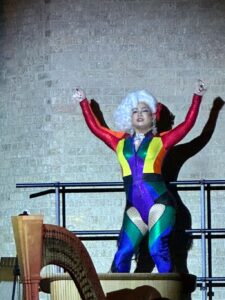 Now we all know this is a gay Christmas, so why was the entire chorus dressed for a funeral in the first half? Black pants, black jacket, black tie (not bow ties), and a white shirt. It enhanced the somber selections of the first half, but not in an uplifting manner. Applause for these selections was tepid, with many not bothering to clap at all. The Ft. Lauderdale Gay Men’s Chorus, which I covered for Sun News many times, also adopted the somber music approach for a while (just over a decade ago) but finally ditched it to the delight of virtually everyone.

For both of my guests, it was the first time they had attended a gay men’s chorus. Here are the reflections of one. “They were into it, authentically enjoying presenting their music to the audience. Not to be overlooked, the music itself was lovely. It was almost refreshing to hear the instrumental selection (which was Fantasy on Away in a Manger). It was beautiful and they played very well. The conductor was so sincere; every fibre of his being was into this performance, which was quite endearing. By the third performance they could have been a bit stale, but no. It was is if it was all new. It was an insight into their personalities which made them relatable. It was a good time concert, feeling that I wanted more. I didn’t want to go home.” 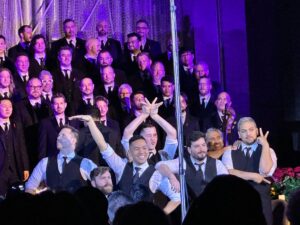