Science and comedy are not so far apart. I don’t mean physicists tell bad puns about how many quarks can dance on the head of a pin, or that comedians, conversely, are deep thinkers on the mysteries of the subatomic world. No. It’s not even about the quantum world’s ‘spooky action at a distance,’ which has the potential to be quite funny on Halloween.

This long-standing mystery of the universe was solved for me an instant by the quick-witted Austin comedian Nate Clingan when he compared how a scientist and a comedian can captivate an audience. It all really boils down to what you know. The scientist does that with a deep knowledge on his or her chosen field in explaining a new discovery. “I use what I know to WOW the audience,” Nate told me.

Nate draws not only on his life experience, but his imagination, in his comedic routines. As Einstein stated, “Knowledge is limited. Imagination encircles the world.” Thus, for a comedian of talent, the world is his oyster.

“Most people who become comedians do it for two primary reasons,” Nate explained. “First is narcissism – trying to get attention. Second is an outlet for such things as emotional stress and creativity. For me it’s just something I know I’m good at. Of course, you have doubts of your ability, doubts about how others perceive you. When I’m performing in front of other comedians I wonder ‘do they think my jokes are good?’ But I always come back around to comedy – that is what I need to do.”

Nate found a very practical use for humour. “In encountering bullying, one way I could stop it was by making them laugh. Socially, I’ve moved past how people perceive me. Making it look like you know what you’re doing, without actually knowing it – that’s a big thing for me. Just be hilarious, a friend told me!”  Such introspection usually comes to a person in mid-life, if at all (the old taking-yourself-too-seriously syndrome). But Nate has found this sweet spot at the age of just 21.

Fellow comedians in their late 20s and 30s have expressed some degree of envy that he is so centred – and so good – at such a young age. “Knowing how it feels on stage as coming off as natural is the nirvana a comedian has to hit,” he said. “Being yourself on stage is the key. People want a real person: the audience tends to laugh harder when you are telling the truth, but it’s a hard thing to be yourself.”

Among Nate’s comedic inspirations are John Mulaney (“writing sense is insane, near poetry”); Eddie Murphy (“I study the performance aspect of his standup”); and Richard Pryor (“he turned standup into what it is today”).

The comedy scene in Austin has been transformed in the past two years. “Joe Rogan moved here and brought everyone – it was a mass exodus of comedians from California. Austin comedy was a mid-market city. Now THE market is here.”

As a result, the competition in Austin is fierce. Nate likened it to a time in the 1950s “when people would wait outside MGM to be an extra in a film. That’s how it feels here now.”

In my opinion, it’s about time the casting director found Nate a starring role.

Nate Clingan can be seen regularly, hosting comedy acts at the Romo Room in The Domain. 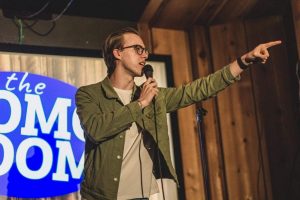