I was in Ingram last week for the Scottish Highland Games. It was held at Stonehenge II, which is 90% as wide and 60% the height of the original one built in England about 4,000 years ago. It was built here by Al Shepperd and Doug Hill in the early 90s. In 2010 the property it resided on was sold, so the Hill Country Arts Foundation came to rescue, moving it to the current site eight miles east.

About half a mile from that location, which also hosts 2 theatre venues, a bakery was opened on April 20 this year. Dubbed the 323 Bakery, it’s not just the address but includes the May 23 birthdate of the owner, Andrew Liskey.

Andrew’s wife Kristen is from Ingram, so they recently resettled from Virginia. “I’ve had a history of baking my whole life,” said Andrew. “My favourite thing is to bake is breads.” He comes from the small Mennonite town of McGaheysville, Virginia. Having worked at the popular Hank’s Smokehouse there, he has brought his Southern tastes here to the Hill Country of Texas.

The 323 Bakery is ensconced in a house that is about 100 years old. It was originally owned by a cedar hacker before becoming a car dealership and most recently a hair salon.

In addition to breads such as 3-seed whole wheat, French loaf and Sourdough, Andrew bakes cowboy buttermilk biscuits, pastries and cakes. Kristen does the cake decorating, and also runs a florist shop from here. “We deliver small bouquets, all made-to-order, nothing is pre-made,” he said. Out back is a big yard selling lawn things such as pots, fountains and metal art. Local artists are supplying art for sale in the shop.

Everything is small-batch, just what one would hope for and expect in a real bakery. For sale on Friday and Saturday evenings from 630 to 9pm they offer small-batch desserts, such as peach cobbler, baklava, brownies and apple pie. You may also find some of these in the store during regular opening hours, 630am to 130pm from Wednesday to Saturday.

Conveniently located on Highway 39, it is 40 minutes north of Medina, the westernmost point of the famous Twisted Sisters loop, popular with motorcyclists. And with numerous arts festivals in Kerrville and Ingram, the business is nicely situated. I bought the sourdough, and made it into French toast as Andrew suggested. Delicious, as was the spinach-filled lattice pastry.

So, on your next trip west from Austin, stop by there without fail and indulge yourself! 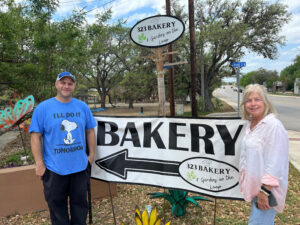