Seven Shakespearean plays feature cross-dressing as a plot. Don’t tell that to the Lt. Gov. of Texas – he might start banning Shakespeare.

Also on the ban list would surely be the play Leading Ladies by Ken Ludwig. The play, a co-production of the Alley Theatre (Houston) and The Cleveland Play House, premiered in 2004. It is currently being produced at the Bastrop Opera House, about an hour east of Austin. Since 1989 his plays have won virtually every award the theatrical world can bestow. For this play, Ludwig was inspired by a subplot in Twain’s Huckleberry Finn, in which two ruffians are determined to inherit a fortune, and resort to impersonation as a ploy to make it happen.

If you like broad farce, English-style, you will revel in the improbable plot lines and deliberately over-the-top acting. And if you are a fan of Jack Lemmon and/or Tony Curtis, this play will bring back fond memories of the 1959 comedy/romance film Some Like It Hot (the great vehicle for Marilyn Monroe). If you have not seen it, try to envision Curtis and Lemmon dressed as women. This ridiculous notion will prepare you for Leading Ladies, where two itinerant Shakespearean actors resort to dressing as women to abscond with two million dollars.

The setting is York, Pennsylvania, where the English (and feminine) accents of Jack Gable (played by Casey Wiggins) and Leo Clark (played by Brian Colson) clash drastically with the Amish-country they find themselves in. The basic idea is that they try to pass themselves off as the nieces of a wealthy woman wo has left the bulk of her fortune to her nieces in far-away England. Clark and Gable (yes, a play on Clark Gable) conveniently show up to collect, only to find the old woman has made a remarkable recovery.

How the “leading ladies” interact with the townsfolk is the gristmill for the farcical events that unfold. The ensemble cast is a delight as the play moves through one gambit after another. I won’t spoil the plot except to mention a particular play by the Bard: All’s Well That End’s Well.

The play is highly dependent on the over-acting abilities of whoever gets cast as Clark & Gable. In this case the effervescence of Colson, and the lumbering girlishness of Wiggins (a very large guy) are the perfect ingredients. They rescue a wholly unbelievable play, which takes a lot of acting chops. This is not one of Ludwig’s best efforts (it failed to add to his roster of awards) but this cast does their very best to make it utterly enjoyable for the audience. To be or not to be a man in drag, that is the question!

Tickets at bastropoperahouse.org. Leading Ladies, directed by A.J. Fuex, is being staged through April 24. 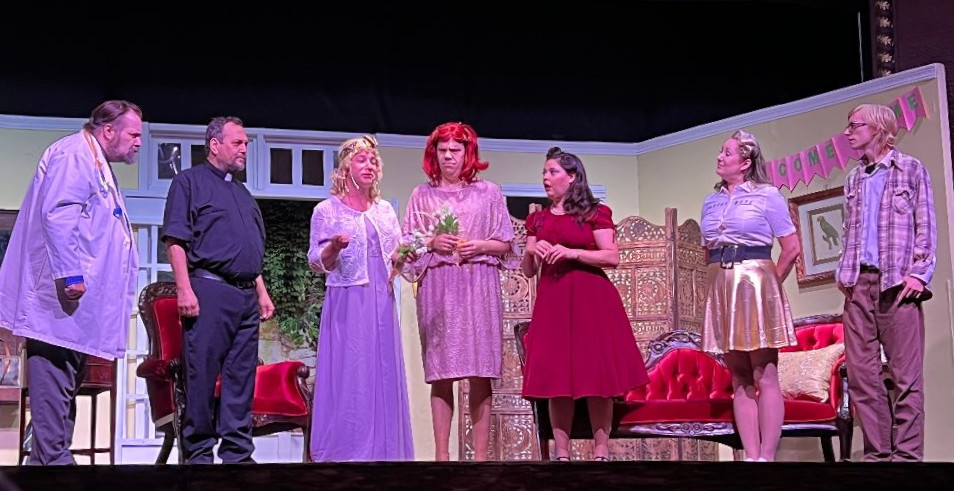