He has been called the pre-eminent cultural anthropologist of American ridiculousness. Austin-based writer Noah Hawley kicked off the first day of SXSW 2022 with a wide-ranging discussion of absurdity.

In an on-stage exchange with Jeffrey Goldberg, Editor in Chief at The Atlantic, Hawley talked about his new book, Anthem, and his role as a novelist is the current age of information. “We live in a deluge of information,” he said. “On the war in Ukraine, we now check in on it every 10 minutes. If the Ukrainian War happened 10 years ago, that would not have happened.”

One aspect of this information deluge is disinformation, which Putin is a master at. I saw an interview this morning with a young woman in Ukraine who phoned her mother in Russia for several days, telling her that Russia had invaded Ukraine and was dropping bombs. Her mother, so brainwashed by Putin’s lies over more than 20 years, refused to believe her own daughter. The daughter has now ceased phoning her mother. Hawley wondered if America is in the early stages of what we see in Russia.

He created the hit TV series Fargo, which began in 2014. “In the third year of Fargo I wanted to deconstruct the phrase ‘this is a true story.’ I wanted to look at that manipulation of reality. I had a Ukrainian grandmother who fled the Cossacks and came to America. I started to think about a Cossack character in the show and that led me to Putin. A couple of episodes into writing it Trump was elected and we ended up with alternate facts and I found myself exploring in great detail the power over truth itself and how there’s a mental violence to realizing the world isn’t what you thought it was. If you want to see what America is going to be like in five years, just look at Russia. In America, fact and fiction have changed places.”

It used to be that the facts were reported and only after some months or years did conspiracy theories arise to question reality. Now, Hawley said, “with the right-wing truth engine the fiction is being written in real time. The January 6 Commission is trying to turn fiction into fact.” 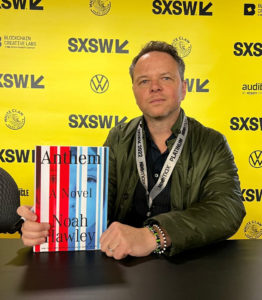 As a novelist, he suggests one way to approach the millions of brainwashed people in the U.S. and elsewhere who are immune to a direct confrontation with the truth. “Entertainment has a power. My book is filled with facts, in direct combat with fantastical elements. If you can tell them a story it might subversively make them think differently.”

He described Anthem as a “fantasy novel of the real world. It’s basically a quest story in which young people leave an anxiety-abatement centre and go on a journey to save a young woman from a character called the Wizard. A pandemic of teen suicide is the catalyst for their journey.”

Hawley said his role as a novelist is “to reflect back the reality I see around me as fiction. What am I supposed to do if the reality I see around me becomes absurd? Not absurd as in funny but as in strange and defying belief. It’s like if you have a president who’s inaugurated on a rainy day and then insists it was sunny the whole time, that in and of itself is absurd and it’s the power over truth itself. That tone of voice became very important to the book.” For those who might not remember, Time magazine reported the truth: “It started raining the moment Donald Trump was inaugurated President.”  For those with a Classical bent, one might say the Gods themselves were shedding tears for America.

Despite this dire situation, Hawley admits he is “constantly amazed by our power to be optimistic,” and he has a serious proposal about how to improve the world. “Every corporate board should have a 12-year-old on it.”