News Ticker
The centrepiece of San Antonio’s 300th birthday bash this year just opened at the Museum of Art. Its importance was emphasized last week when the King and Queen of Spain made a visit to tour the exhibit of paintings on display, mostly from Spanish museums.

Unlike most exhibits that come to the U.S. from Europe this is not a touring exhibit, a source of great pride in San Antonio. If you want to see this collection, you must visit the birthday city. For the background of how the selection of paintings was negotiated, I refer the reader to an excellent article in the San Antonio Express newspaper on June 23, the day I visited and the first day for public tours. Suffice it to say Spain is proud of the fact this city was founded by Spaniards, so showing a range of Spanish painting covering 500 years made the negotiations relatively smooth.

The only request that was denied was for a Velazquez painting. One of Spain’s great painters is not actually that well represented in Spanish collections, so the authorities suggested the museum borrow one from an American collection. Thus we have a portrait of Queen Mariana, dating from 1656, on loan from the Meadows Museum in Dallas. Those who think ‘big hair’ was a new fashion trend of the 1980s will find the bizarre appearance of Mariana a suitable corrective.

For a major exhibit one might think only 43 canvases to be a rather meagre offering, but quality makes up for quantity. For the lead photo, I have chosen a detail from Goya’s 1801 portrait of the Spanish Prime Minister Manuel Godoy, who just happened to be Goya’s patron. We see him here reclining with studied insouciance, obviously pleased with himself in his role as “Prince of Peace” in the short-lived conflict with Portugal charmingly called the War of the Oranges. It was instigated by Napoleon, who demanded Portugal break ties with Great Britain. When Portugal refused, French and Spanish troops invaded, forcing Portugal to capitulate. So while we see here a man who projects power, we must remember he did so through brinksmanship coupled with a total disregard for the sovereign rights of another country (remind you of anyone who invaded Crimea recently?). It has been suggested Goya revealed his true feelings about Godoy by painting the backside of a horse next to him (at left in this photo). Godoy died impoverished and notorious in 1851.

Goya was an artist for the people, which is perhaps the reason he is represented in the exhibit by 4 canvases. One depicts a bullfight with amateur matadors in bright red and gold clothes (from the Prado in Madrid); a 10-year-old, stiffly standing while his little dog seeks attention (from Museum of Fine Arts, Houston); and another military portrait (from the Virginia Museum of Fine Arts).

Moving further in the 1800s are works by little-known artists such as Rafael Garcia who died at age 22 and a painting of Hagar and Ishmael in the Desert by Antonio Esquivel. This 1856 work (from the Museo del Romanticismo in Madrid) shows that even in the nineteenth century Biblically-inspired works continued to be made, but anyone who does not know the backstory could look at this today and see a refugee Mother in the Middle East holding her dying youngster. 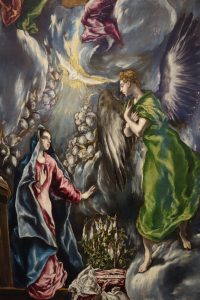 Capping the 19th century is The Artists’s Sister, Lola, by Picasso, followed by 6 paintings ranging up to 1913. Note the exhibit covers 500 years, but it is not the most recent 500 as the range covered is 1429 to 1913. Why the past century is not included is a bit curious, but does not detract from what we have the pleasure to see here, beginning with that 1429 work, The Martyrdom of St. Sebastian by Juan de Peralta (from the Museo Cerralbo, Madrid). Paintings of this period revelled in Biblical death and blood, so it is pleasant to see a pair from 1493 that do not: St. Francis of Assisi and St. Anthony of Padua. The latter is particularly important as St. Anthony is the patron saint of San Antonio. These works are from the Museo Lazaro Galdiano, Madrid. The St. Anthony shows an important development in European art of the time: on the right is a window with a landscape that offers a 3D perspective, as well as light into the indoor scene.

Two contrasting depictions of another saint, this time Jerome, are shown. Both are by the great master El Greco, from around 1600 and both are dominated by brown tones, but another of his works, The Annunciation (from the Museo Thyssen-Bornemisza in Madrid) is a riot of colour. The white dove of peace is bathed in yellow, while robed figures in red, blue and green dominate the canvas (a detail from the painting is shown here, at left). A startling work for the age, it found little favour in the eyes of the Spanish king of the day, although it now regarded as a masterpiece of the highest order.

Finally I will mention Saint Elisabeth of Portugal, by Francisco Zurbaran, whose paintings of the Old Testament prophets I reviewed on their recent exhibition in Dallas. This work of 1635 (Prado, Madrid) is a full-length study of the consort of King Denis of Portugal (pictured here, at right). It shows the same attention to the subtle shading and crinkles in robes as those work by the prophets, and since Elisabeth was made a saint, it follows in the same religious tradition as that suite of paintings which came to Dallas from Scotland.

Overall a thought-provoking insight into the development of Spanish painting, whose highlights and trends are emphasized in this compact exhibit.

500 Years of Spanish Painting is on display until Sept. 16, 2018. Visit the website for tickets: www.samuseum.org. There is a 68-page colour booklet for the exhibit; generally well done but some reproductions are a bit too dark to reveal the details on a painting. There are also art history talks by professional art historians on July 31 (El Greco), Aug. 14 (Juan de Flandes), Aug. 28 (Goya) and Sept. 11 (Velazquez and Zurbaran).