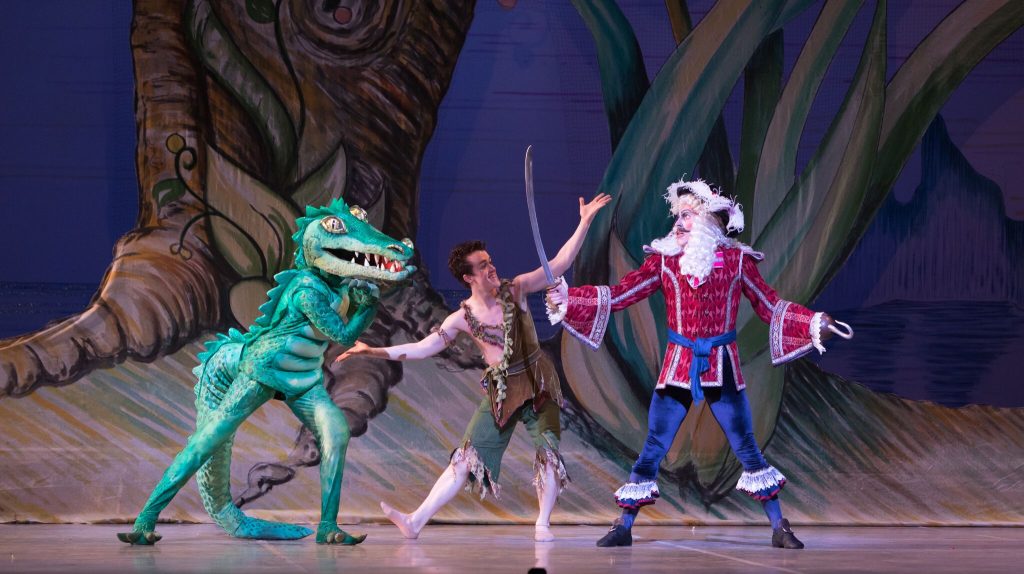 Ever since he sprung from the imagination of J.M. Barrie in 1902, Peter Pan has seen himself on stage and in the movies. Austin audiences are being treated to the latest stage adaptation by Paul Vasterling, who talked of his 2013 creation at the Long Center this weekend.

Currently CEO of the Nashville Ballet, Vasterling said his marketing director challenged him to do a new ballet for families. At first he had no interest in Peter Pan, but after reading the novel “I felt inspired by it.”

A key element of the ballet is the music, “but I didn’t find one I really liked. Since I couldn’t find a score, I made my own. It pushed me in different ways, and while using all French composers for an English fairy tale seems counter intuitive, I found the Children’s Corner Suite by Debussy to have a magical innocence to it.” Other composers he used to create the score were Bizet, Faure and Ravel, and it certainly works to great success.

Another key element for such an ambitious production is the set design. Vasterling abandoned the high tech that is so much a part of the theatre world. “We went old-school with painted canvas backgrounds. It is interestingly simple when you get on stage,” he explained, and for the audience it evokes that early 20th century feel that Barrie himself must have experienced when Peter Pan was first seen on stage in 1904. A great job by set and costume designer Campbell Baird.

The ballet itself takes flight, quite literally, as a series of cable lines each capable of holding 480 lbs. allows Peter (performed with assertive charm by Ian J. Bethany) and other members of the cast to ascend above the stage. Peter’s movements are controlled by two people operating two cables, while the others have one each. Each one of these operators is joined offstage by a dancer to direct the operators. They had only 15 hours to practice the flight choreography before the premiere on May 11, but it went off without a hitch. Tinkerbell, delightfully danced by Courtney Holland in the premiere, is portrayed both as a spright with a light glowing around different parts of the stage, or as the green-clad ballet dancer. This distinguishes Tinkerbell’s portrayal in other productions, which shows her as one or the other.

The duets between Captain Hook (Paul Michael Bloodgood) and the Ticking Crocodile were scene stealers. Edward Carr was able to project the croc’s sauciness even though he remained invisible within the iridescent green skin of the croc, and Bloodgood ably brought to life the Three Stooges, whose antics inspired the choreography of the duets.

The ability to developed believable characterisations without getting caught up in the performance is actually the hallmark of this entire Peter Pan production. With a nod to neoclassical dance movements that allow greater individual expression, Vasterling has hit the right mark. Austin audiences will be pleased to know their own Symphony Orchestra, under the direction of Peter Bay, is performing the music. The dozens of cast members all do their part to make this the magical experience Barrie would have enjoyed.

Peter Pan will be performed again tonight at the Long Center at 8pm, and May 13 at 8pm.
www.balletaustin.org