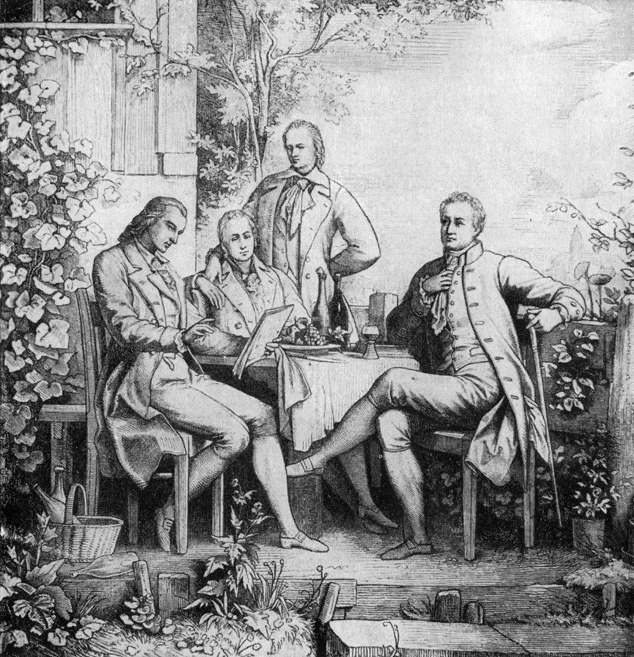 This book is so delicious I did not want it to end. Andrea Wulf, who lives in London, has written the best book of 2022: Magnificent Rebels.

Wulf is best known for the book The Invention of Nature, which has won 15 international literary awards and was published in 27 languages. That was about the German naturalist Alexander von Humboldt and his famous voyages of discovery from Russia to South America.

The Humboldt family (Alexander, his brother William, and William’s wide Caroline) features prominently in this book, which in some sense is an extension of The Invention of Nature. Here, they are but three of the stars in Wulf’s intimate description of the First Romantics.

Wulf concentrates her gaze on a small group of people in Jena (Germany) whose individual and collaborative efforts reshaped the world: Johann Goethe, Friedrich Hegel, Novalis, Friedrich Schiller, August Wilhelm Schlegel and his brother Friedrich, Johann Fichte, and Friedrich Schelling. (With all the Johann’s and Friedrich’s it can get a bit confusing). This is not just a stellar cast, but the greatest ever intellectual gathering in one small town.

The author compares this group with other notable ones: In Concord, Massachusetts we had Emerson, Thoreau and Hawthorne; in Bloomsbury were Woolf, Forster, Bell and Keynes; and in Paris we find Hemingway, Pound, Stein and Fitzgerald. “I believe that the Jena Set is, intellectually speaking, the most important of all these groups,” writes Wulf. She quotes Novalis, who proclaimed “We are on a mission,” he stated in 1798, because “we are called to educate the world.” Wulf says they succeeded “by placing the self at the centre of everything. In doing so, they liberated people’s minds from the corset of doctrines, rules and expectations. They became known as the ‘Young Romantics.’”

August Wilhelm Schlegel, looking back on the wonder years (1794 up to 1804/05) encompassed in this book explained what they were trying to do: they had, writes Wulf, “woven together poetry and prose, nature and art, mind and sensuality, the earthly and the divine, life and death.” Elucidating that dizzying panoply is what this book attempts, and does so most effectively. There is literally something worth quoting from every page, so this review will be confined to a very few highlights.

The second chapter opens with Fichte, 32 years old, lecturing in the largest auditorium in Jena. It was too small to hold the crowd. “Students spilled out into the corridors and stood on ladders at the windows to listen to their new professor.” One called him the Bonaparte of Philosophy. Imagine anywhere in the world today where an overflow crowd would greet a philosopher, especially one who declared “I am the priest of truth.” Wulf said Fichte wanted “nothing less than to incite a revolution of the mind, and to seize the torch from Immanuel Kant.” Undeterred by greatness, he went to see Kant, who was so impressed with what Fichte wrote, he suggested it be published by his own publisher! It was duly published in 1792, launching Fichte’s career like a supernova. “My will alone,” he roared from his lectern, “shall float audaciously and boldly over the wreckage of the universe.” Wulf writes that “His students were electrified. Here was a professor who made them feel alive.”

Meanwhile, the magnet that was Jena starting drawing in more luminaries. Wilhelm von Humboldt and his wife Caroline moved into a house close to Schiller’s apartment. Wilhelm “quickly became Schiller’s philosophical sparring partner and editorial advisor for Horen,” a journal Schiller published. Goethe, who was a witness to all this on his visits to Jena, reported that Horen was so sought after, “people tear the issues out of one another’s hands.” Again, imagine that happening now with a philosophical journal. One of the people who avidly read Horen was a student of Schiller at Jena University: Novalis, the young man who became to many the brightest light of the Romantic era. “The theory of love was the highest science according to Novalis.”

When in Jena in these early years, Goethe stayed just a short walk from Schiller’s place, and it soon became his second home. The two great thinkers “often talked deep into the night,” and read to each other. “Schiller pushed him closer to philosophical ideas. Goethe, though, checked Schiller’s over-reliance on abstraction.” It was a mutual admiration society of two. Schiller looked at Goethe’s output with “friendly envy.” He wrote that “Goethe has only to shake the tree gently and the most beautiful fruits, ripe and heavy, fall into his hands.” No one since Shakespeare, he said, had been as gifted as Goethe. Next to visit Jena was August Wilhelm Schlegel, who met frequently with Schiller and Goethe in 1796. He was busy translating Shakespeare into German, and became a regular contributor to Horen. Wulf devotes much of the book to Schelling, who often discussed philosophy with Goethe. Unlike Fichte, Schelling believed “absolutely all of our knowledge originates in experience.” When his book System of Transcendental Idealism was published in 1800, it was declared the most important philosophical work of the age. Wulf writes it “became the philosophical underpinning of Romanticism.”

As for Alexander von Humboldt, the younger of the brothers, Goethe said being with him made him dizzy with ideas. He told a friend “that you sometimes don’t know, or care, where your head is.” After a few weeks in Jena, Goethe was so exhausted he left for Weimar, but nearly at once missed Alexander so much, he invited Alexander to Weimar. Once Alexander departed, Goethe could not bear to miss to electric excitement of Jena, so 4 days later he was back there! This was in 1797. A decade later, when Alexander published his book Essay on the Geography of Plants, it was dedicated to Goethe. Hegel (who arrived in Jena in 1801) lurks in the background for much of the book, but when he published  Phenomenology of Spirit in 1807, it made him “the most famous philosopher of his age, dethroning Fichte and Schlegel.” After the departure of the rest of the Jena Set, he alone remained in Jena.

While it goes against the grain of modern science, the Romantics forged a mindset that has endured. Wulf encapsulates the essence of it in these lines. “The sciences must all be poeticized,” Novalis wrote to Friedrich Schlegel, who agreed. He too would turn physics into music. Friedrich wrote “What I really want is to make Euclid singable.”  His brother August Wilhelm Schlegel put it best in his book Lectures on Dramatic Art and Literature. Romantic poetry, he argued, was “the expression of the secret attraction to a chaos which is perpetually striving after new and wonderful births.” A poet, writes Wulf, “understood the world better than a scientific mind because the language of science was too mechanical and atomistic.” Novalis insisted that “Poetry is true absolute reality.”

Novalis declared Caroline was the heart of the Jena set. When the Schlegel brothers began their own journal, Athenaeum, in 1798, Caroline assumed the role of editor. “Confident in her judgement, she dispensed criticism with a smile.” She is not as well-known as the others, however, as she published nothing under her own name. Wulf characterises the journal as their “manifesto to the world.”

I could write another thousand words. Suffice it to say the prose is scintillating and the story it tells is one of the most compelling and significant ever told.

The book covers all the highs and lows, to their breakup caused by death (Novalis died in 1801, age 28), marital disputes, rivalries, and the exigencies of war as Napoleon raged across Germany. As Wulf writes in conclusion, “The Jena Set gave wings to our minds. How we use them is entirely up to us.”

Even though it is not included in Wulf’s bibliography, I recommend the following book for those who want to delve deeply into the philosophy of this period: The Twenty-Five Years of Philosophy, by Eckart Foerster (2012) covers the period from Kant to Hegel, with attention to the works of Fichte, Schelling and Goethe.

Magnificent Rebels: The First Romantics and the Invention of the Self is by Knopf & (in the U.S.) Penguin Random House. It lists for $35.