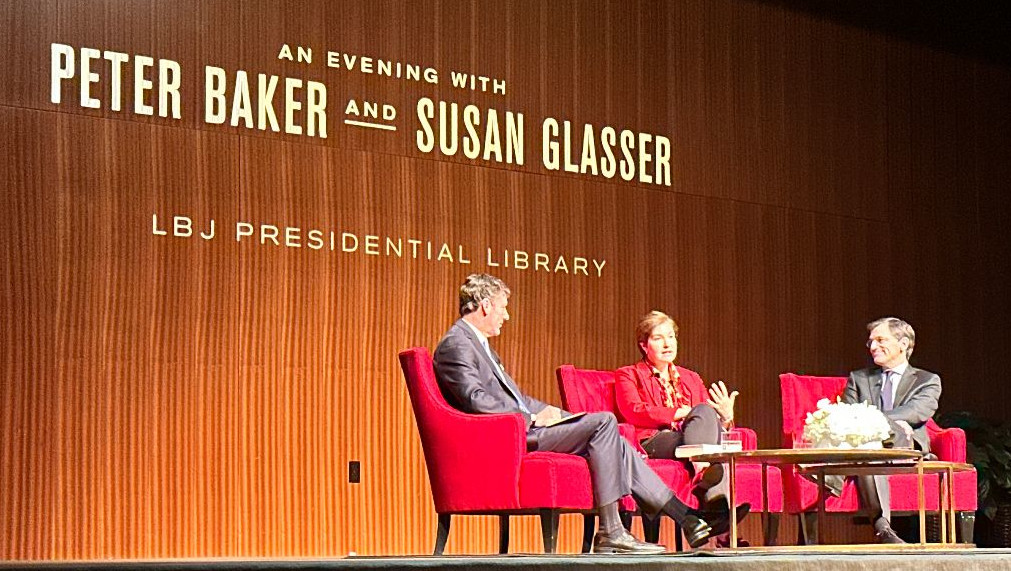 As the crimes of the former president become ever more obvious, we are reminded of the words of Shakespeare, who might have been describing the White House from 2017-2021: “Hell is empty and all the devils are here.”

The authors of The Divider do not, unfortunately, leaven their weighty tome of 725 pages with literary allusions. This is strictly a book of no-nonsense reporting by two of America’s greatest journalists: Peter Baker (chief White House correspondent for The New York Times), and Susan Glasser (staff writer for The New Yorker). Baker has written several books on his own, and the duo have collaborated on two other books. They both spoke on their new book at the LBJ Library in Austin on Dec. 13, 2022.

The authors push back on the mantra that people who voted for DT in 2016 didn’t really know what he was like. “No one ever had as much hard-hitting journalism about him than T.,” said Glasser. “There were several biographies about him. You could read a 1979 profile about him and learn a lot about him. If you wanted to know what kind of president he would be you could read it.” They point to many years of interviews, notably one in Playboy magazine, which “was a kind of Rosetta Stone for what he thinks.” Amongst other things, they point to the fact he praised the Chinese for the 1989 Tiananmen Massacre, in which hundreds (perhaps thousands) of civilians were murdered by the Communist government in public. What the protestors wanted was freedom of speech and freedom of the press: what they got was a bullet. DT liked that. (I do not use his full name here, as starving a crazed dictator of oxygen is the best approach). When peaceful protestors gathered near the White House, T asked General Milley (Head of the Joint Chiefs) “Can’t you just shoot them?”

To compare him to another incarnation of evil, Baker said “When you say fake news what you’re saying is ‘I don’t believe in the concept of a free press.’ He discredited any source of information except himself. Putin said the same thing. It is corrosive to the system.” As for his relationship to Putin, they admit “we don’t solve the mystery,” but like Watergate it’s always wise to ‘follow the money.’ As Baker reminded the audience, “His own son said we got our money from Russia.”

Glasser explained that the book was, in a sense, journalistic therapy. At the very least, she was able to discern a silver lining in a very dark cloud. “DT’s years are a return to First Principles, which is a good thing. T was really about a crisis in democracy which gave journalists a sense of mission. The weaponization of facts was an important moment as a journalist to understand that what we’re doing really matters.”

She identified a disconnect that is at the heart of the problem in understanding him. “What’s remarkable is this: the link between T and journalists and readers has broken down.”  Speaking metaphorically, she continued that “It was our job to pick up the rock and show the creepy crawlers underneath, and then let the voters decide. It doesn’t work anymore!”

Baker elaborated further on journalistic responsibility. “Our job is not to be his opponent – our job is to report the truth. If we use the word ‘lie’ all the time it loses its power. We were conservative about that, but we did say it about the birther lie (that Obama was not born in America).” Journalists recorded DT making 30,000 statements that were false or misleading while he was in office. Of course, human nature has not changed for thousands of years. In Homer’s tale, Odysseus “made the many falsehoods of his tale seem like the truth.” This deep historical perspective is not included in the Baker & Glasser book.

“Accountability has broken down,” lamented Glasser. “What we learned is that accountability is non-functional. For example, it’s almost inconceivable of seeing impeachment used anymore to restrain a president.”

As a reason for writing this book, Glasser said “We felt it was important that in the manufactured chaos, it was important to record what happened. In some ways the public theatrics of the T show took away from the weaponization of the military and the Justice Department. We were caught up in the revolving door of Twitter feed.” In other words, journalists as a whole were played by the greatest conman in history. While he was throwing smoke bombs and stink bombs, he used them as a cover to undermine the basic institutions of the country. People held their nose and closed their eyes for 4 years; when they opened their eyes again, it was too late: the insurrectionists were storming the citadel of Democracy. “Here we document it was not just a show: it was much more serious than that.” As they write in the book (pg 469), “farce mixed with fury” was the order of the day.

In reality, of course, the emperor has no clothes. “His insecurity came out when we met him for the book.” When the topic turned to the Covid response, the real T was revealed: “He is scared of his base!”  T said “I’ve been asked to do a public service announcement about the vaccine.” Months later they meet him again and they ask what happened, as no such announcement was made. “I don’t know what you’re talking about. Who told you about it?” They replied “You did.” “No,” T responded, “I don’t know anything about it.” Like a good little Communist, he can’t tell the truth. Glasser and Baker said that what spooked him was getting booed by his own audience at a rally when he started talking about getting vaccinated. After that, public health went down the toilet so that he could retain the support of his lemmings, who gladly followed him over the edge of the cliff, many of them dying as a result.

While it appears now that T’s third run for the presidency is a sick joke, letting one’s guard down could be the biggest mistake of all. Glasser said he took over the so-called lawmakers through “tribal loyalty over facts in front of their very eyes. Washington consistently misread him, which is a major element of the book. He acted like such a buffoon but he told us exactly what he wanted to do. Even so, millions refused to take him seriously. Even Attorney General Barr thought it [the election] was over on Dec 14, 2020. Senate majority leader McConnell, an enabler of T, also underestimated him.”

In conclusion, Baker noted ruefully that “Norms we thought were inviolable were just advisory. Things that were unthinkable are not illegal.”

It is often said that history can only be written with hindsight. A remove of some decades is generally considered a ‘safe’ distance to offer the appropriate perspective. While true, that does not stop historians and journalists from writing about recently-minted history. With that caveat in mind, I can say that this is THE Definitive book on the DT Administration, as far as it can be done in our current era. Historians will certainly be writing even more complete accounts in 2072, but for now, this is the best. Highly recommended.

As an addendum, I must also recommend a complementary book to this one: Confidence Man: The making of DT and the Breaking of America by Baker’s fellow New York Times journalist Maggie Haberman. Another weighty tome (597 pages), this will be reviewed in SunNewsAustin in the near future. Also read another related article in Sun News, just published today:

The Divider: T in the White House is by Doubleday. It lists for $32.