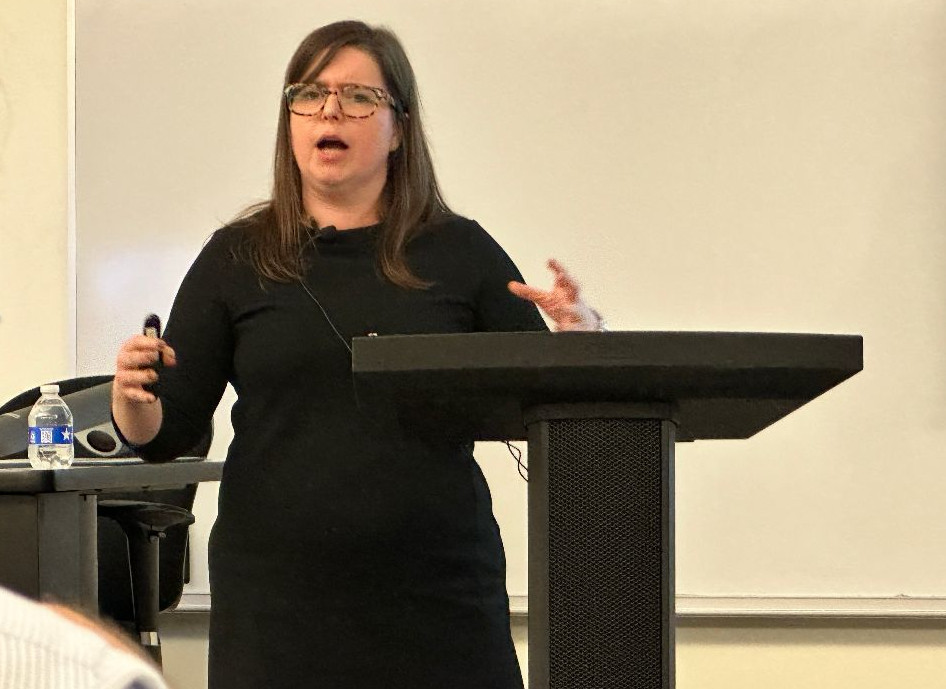 “In a somewhat unusual thing for a book, my central cast of characters are three types of missiles.”

So stated Dr. Susan Colbourn in a recent talk at the University of Austin hosted by the Clements Center for National Security. Colbourn, Associate Director of the Triangle Institute for Security Studies at Duke University, has written a book about Euromissiles that nearly destroyed NATO.

Two major simultaneous phenomena characterise current studies of the Cold War: growing access to archival material from the 1970s and 80s; and the generational shift. Enough time has passed that a generation of scholars now writing about this period do not have first-hand memories of the Cold War. “Many of us, myself included, were young kids when the Berlin Wall came down.”

“A critical element of this project for me was to write an accessible account of an immensely complex issue using newly released archival material.” For younger readers not familiar with “the dynamics and arguments that underpinned so much of the Cold War; the assumptions that lurked in that system; and the nuclear arms race between the two superpowers and their respective alliances.”

“To explain why the Euromissiles mattered, I felt that it was necessary to bring widespread social movements alongside nuclear strategy and superpower diplomacy. Euromissiles shifts the frame: rather than focus on one dimension of the issue I opted instead to put NATO at the centre.” She considers the interactions between alliance politics, electoral politics, and superpower politics. It was a choice that ultimately shaped how I approached the research that I did for this project.”

The problems of allied defense were foremost among the issues she identified. “Since the signing of the North Atlantic Treaty in 1949, the Western allies had struggled to figure out how to provide a sufficient defense. As an intellectual exercise, if you were designing an alliance from scratch in the Cold War world, you probably would not have ever picked one shaped like NATO. You would not want your most powerful actor to be the furthest from the front lines, against a land power sharing a border with most of the countries you are going to promise to protect. This created perennial problems about how to credibly project power and provide sufficient reassurance to the Western European powers.”

Colbourn compared the story of the Euromissiles to the projection of power problem from the United States to the Soviet border: there is no difference. “In the book I follow these debates from the wake of the Cuban Missile Crisis in 1962 through to the end of the Cold War. In finding the origins, the conventional wisdom holds that the issue began with the Soviet deployment of the SS20 missiles in the 1970s.”

While they were an important advance, the threat they posed was regarded differently in various countries. “West German officials were alarmed. Both the Administrations of Pres. Carter and Pres. Ford offered repeated assurances to West Germany that these missiles did nothing to change the overall balance of power.” But the Carter Administration changed its tune when the neutron bomb was developed by the U.S. “In the summer of 1977 press leaks drew attention to this new tactical weapon and it quickly set off a firestorm of galvanized protestors.”

By 1978 the allies were “on the verge of approving an incredibly complicated package that married a deferral of deployments of the neutron bomb and an arms control offer to the Soviet Union. Then Jimmy Carter pulled the plug.” Like many of his ill-conceived decisions, he was widely criticized for this as a lack of leadership. The West German leaders derided him as a religious dreamer. The Carter Administration was described by one German statesman as a ‘leaderless hencoop.’”

As a sop to the Europeans, Carter decided to deploy new missiles to Western Europe. It took another 18 months to reach an agreement. “What resulted in 1979 was an agreement with 2 main components,” the so-called Dual-Track Decision. The West German government wanted a non-nuclear power to accept some missiles. Italy, Belgium and The Netherlands agreed to base missiles on their soil. The second track was to undertake arms control negotiations to try to negotiate reductions in the Soviet arsenal, particularly the SS20s. Those were the most important of the three missiles Colbourn highlights; the other two (the U.S. Gryphon cruise missiles, and the Pershing II) are much more shadowy characters. By late 1981, neither of these American missiles had been deployed to Europe. A table of data showing the relative number of missiles on both sides during these years would have been useful; the book has only 11 illustrations, and no tables, although the excellent bibliography and index take up more than 100 pages.

As she writes in the book, “The Kremlin leadership had put its reputation on the line to stop the Dual-Track Decision.” Contrary to American expectations, the Dual-Track also created an immense amount of anxiety amongst the allies. “The Dual-Track came at a particularly terrible period in U.S.-Soviet relations in December 1979. Just 2 weeks after the alliance met, the Soviet Union invaded Afghanistan. There was widespread concern the Cold War had returned to Europe after several years of relative peace. The Soviet Union and its allies amplified home-grown dissent: they provided funds and carefully calibrated messaging to maximise discontent.” But while they tried to foment dissent in Western Europe, most of the protestors did so from their own motivations. “Some came from a fear of nuclear war, others because they rejected the underlying logic of the Cold War competition, some because they had religious objections to the morality of nuclear deterrence.”

In her book, Colbourn goes into much detail on this. “The basic of NATO’s strategy,” she writes, “required a leap of faith. What the Western allies asked of their publics was that they take their elected officials and unelected bureaucrats at their word that security could be best preserved through the acquisition of weapons that could unleash untold destruction.” The Oxford historian and peace campaigner E.P. Thompson skewered this concept: “The name of the game, on both sides, is mendacity. Indeed, ‘deterrance’ might itself be defined as the biggest and most expensive Lie in history.” It certainly kept the military-industrial complex (which Eisenhower warned of) very busy and rich for many years. Some Germans were also opponents of the status quo. One quoted by the author in her book (pg 155), said that champions of deterrence were the modern-day equivalent of a man holding lectures (while on board the Titanic) about the unsinkable nature of ocean liners.

But against the backdrop of public opposition to nuclear weapons, the U.S. and the Soviets began arms control talks in the fall of 1981 in Geneva. Often dismissed as a public relations stunt, they did nothing to stop the deployments of American missiles in Europe in 1983, or the announcement by Reagan of the Star Wars program (the Strategic Defense Initiative), which upset the allies as much as it did the Soviets. But the Soviets continued negotiating as the UK and Italian governments accepted the missiles; however, when West Germany did so, they walked out. “It was a good reminder of just how much the issue was in fact about West Germany’s place in the European order in the Cold War.”

It was not until Gorbachev came to power that the logjam was broken. “He was willing to accept a fundamentally lopsided deal which preserved clear U.S. advantages. In the agreement Gorbachev and Reagan signed in 1987, the Soviet Union destroyed 1,000 war missiles and they agreed to a much more aggressive inspection regime than ever before.” The Euromissile gambit worked: the Soviets blinked first. In her book, Colbourn writes of the strategic shift that finally happened. “When the Western allies gathered in London in July 1990, they shied away from the strategy of flexible response that had guided them since 1967. In its place came a new formulation: a promise that nuclear weapons would only be used as a ‘last resort.’” Thanks to Putin’s aggression, that ‘last resort’ may yet come to pass.

A key takeway from Colbourn’s study is the nature of NATO during the Cold War. While it is often thought of as a U.S.-led coalition, “it was much more of an equal partnership between the United States and the Federal Republic of Germany. It suited both of those parties and everyone else in the alliance to pretend otherwise. It was easier to not talk about German power because of the legacies of the Second World War, and so everybody lived with another ambiguity: a convenient fiction.”

The book does contain light moments. I especially liked the rabbit and bear joke told by the chief Soviet negotiator as the first session of the 1981 Geneva talks opened. I won’t give it away, but it was a transparent call for the United States to throw its allies under the bus. Nothing like gallows humour to start a negotiation!

A very fine book on a critical aspect of the Cold War. For another perspective on the Cold War, read my recent review on President Reagan’s attempts to end the stalemate and the Soviet Union itself:

Euromissiles: The Nuclear Weapons that nearly Destroyed NATO is by Cornell University Press. It lists for $36.95