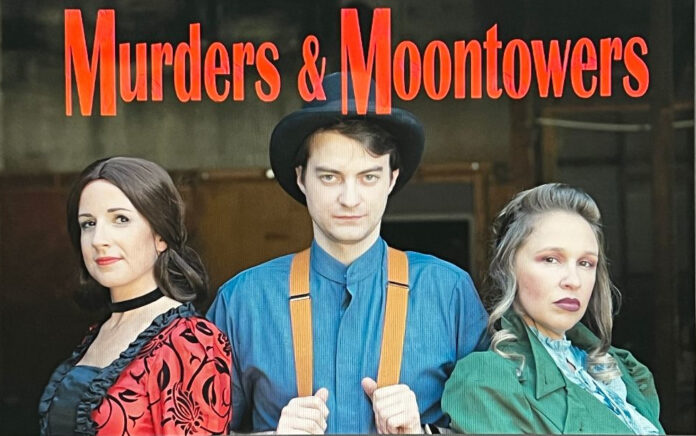 A slice of Austin history is on display now at the Dougherty Arts Centre. It is in the form of a musical play, and while it is just an hour long, it is a sheer delight.

While several of the tunes are corny by modern standards, they reflect the time period of the 1890s when it is set. The play combines two aspects of Austin history: the serial murders of women and one man that terrorized the residents in 1884 and 1885, and the erection of towers to spread light at night. While there appears to be no direct evidence the towers were erected to reduce crime, the idea of lighting to do just that was certainly a factor in the spread of street lighting for more than a century.

One of Austin’s experts on what popularly became known as Moontowers was present at the opening of the musical Murders and Moontowers. In 2017 Jeff Kerr co-produced the documentary The Last of the Moonlight Towers. It looked at the 17 remaining towers, out of an original suite of 31 dotted around Austin. Our city is lucky to be the only one in the world that still has any of the towers remaining.  They were erected here in the 1890s.

“What you are about to see tonight is so historically accurate you could call it a stage documentary, or not. Maybe they made the whole thing up,” quipped Kerr. Speaking of the murders, he said “Because several of the women were household servants, the author O. Henry came up with the term The Servant Girl Annihilator.” He related the festivities surrounding the first tower in 1894. “Hundreds of people attended the lighting ceremony and afterwards they were entertained by a group of Japanese acrobats. Austin has been keeping weird for quite some time!”

The musical, with a cast of seven, is an unceremonious riff off of the very serious matter of the murder spree. When Jack the Ripper started terrorizing London, the police had their suspicions that he might have travelled there from Austin. Our city has the dubious distinction of hosting the first recorded serial killer crime spree.

The play, written by John Cecil, is a production of Texas Comedies. It opens with a very fine song, It’s Dark, emphasizing the lack of light at night in the small town of Austin. There were fewer than 15,000 people here in the 1880s when the murders took place. The musical portrays the mayor (played to the hilt by Dan Dalbout) as a rather bumbling but good-natured fool who is quite out of his depth in dealing with the crisis. He was, however, working with an electrician who had devised the idea of erecting 165-foot towers with very bright lights on top. This leads to a delightful Electrical Power song.

But nothing compares to what must surely be the only song ever written about phrenology, There’s A Bump on my Head. Combining madcap elements of a small-town vigilante group intent on arresting the murderer with the modern scientific concept of banishing nighttime, this historically-flavoured play is a must see.

Murders and Moontowers runs through Sept. 17. 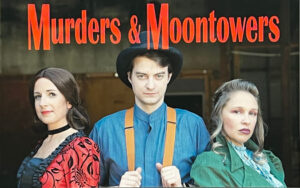