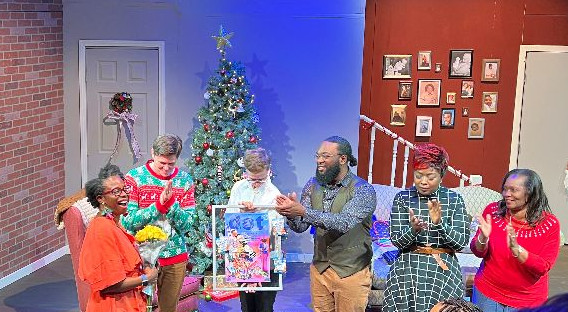 A key dynamic in the play Dot, which had its premiere in 2015, is between Shelly and her Mother Dottie. Early in the play Shelly utters one of most famous proverbs of all time: The apple doesn’t fall far from the tree.

It comes from a type of proverb that speak about the sorts of alterations that are not to be expected, given the nature of things, about how natural and human things tend to work out. Specifically, the apple proverb speaks to commentaries on heredity. This play is all about heredity, not just the dynamics of how a black family interacts with its parent and siblings, but how that dynamic is distorted and tested to its limits by the dreaded disease Alzheimer’s.

Acting from the entire cast is powerful and entirely convincing. One black lady I spoke to in the audience said it represented “The best of American transparency, with gays, whites and blacks working together. It flowed and formed a more powerful bond with people in the audience.”

I interviewed the director of Dot, Dr. Lisa B. Thompson, to explore the meaning behind this play. Its staging at Austin’s Ground Floor Theatre (GFT) marks her directorial debut. “I’ve been a playwright for almost 25 years. This play gives you a sense of the broader ecosystem of the theatre and storytelling. As a playwright I love to collaborate with other people and see what they do with it. But being a director: now you’re in charge of managing all those different collaborators coming together, and making sure you are able to open on-time on opening night.  That’s been very invigorating and it’s been nice to have a new challenge.”

She said her experience here is being translated to her own classroom at the University of Texas, where Thompson is Professor of African and African Diaspora Studies. “My students came to the dress rehearsal (I’m teaching playwrighting this semester), so it was wonderful to have them read the play. I’m definitely going to incorporate more of real, hands-on, work in the theatre. The local theatre scene here is amazing and I’d like them to be part of that.”

Dr. Thompson said the playwright, Colman Domingo, has a close connection to her. “The first play Domingo directed was my play, Single Black Female, in 1998 when I was a grad student. He directed that in San Francisco. The first play I’m directing, funny enough, is his play, so it’s kind of crazy!” Some years ago Lisa Scheps of the GFT asked the professor what play she would like to direct, and the answer was Dot!

Dr. Thompson told me that dementia disproportionately affects effects black women, so the play interested her both professionally and personally. Her own personal experience of “what it means to navigate having the matriarch be so vulnerable this way” was a very powerful factor in her directing experience here. In real life, “it was great to be able to work with my siblings about who is good at what, and how we can support her. And also realizing it’s like when you have children, they grow and change over the course of time you have a relationship with them. The child had at three is not the same as at later ages: they go through phases. What I found with my Mother was that as she started to really decline I would love her in each of the phases that she was in, and not wanting her to be what she was before, but who she is now, as she changed because of the disease.” Dr. Thompson has some sage advice for families dealing with this issue. “Be in the moment with them, and it’s kind of beautiful. People kind of bloom into who they are.”

People concerned about dementia need to have their genetic markers checked. There is a risk gene with three variants. If you have the e2 gene, it will reduce the risk of Alzheimer’s. The e4 conversely increases the risk of the disease, while the e3 doesn’t seem to affect the risk one way or the other. You can inherit two copies of these genes, as one comes from the father and one from the mother. Of course there are many other factors, and no cure, but if want to be tested insurance sometimes covers it.

Despite its serious nature, there are many funny moments in the play, not to mention the running gag of Shelly’s brassy hair colour. “You look like a mean pineapple,” said Dotty. With a mix that includes a cute but illegal Russian male caregiver (Fidel), an inter-racial gay couple (Donnie & Adam), a nervous-nelly friend (Jackie), and a loud-mouthed female sibling (Averie), there are many laughs here. Go see this play, it is really quite excellent.

Photo: Dr. Thompson (at left) being presented by the cast with a commemoration to mark her directorial debut. Photo copyright by SunNewsAustin.com