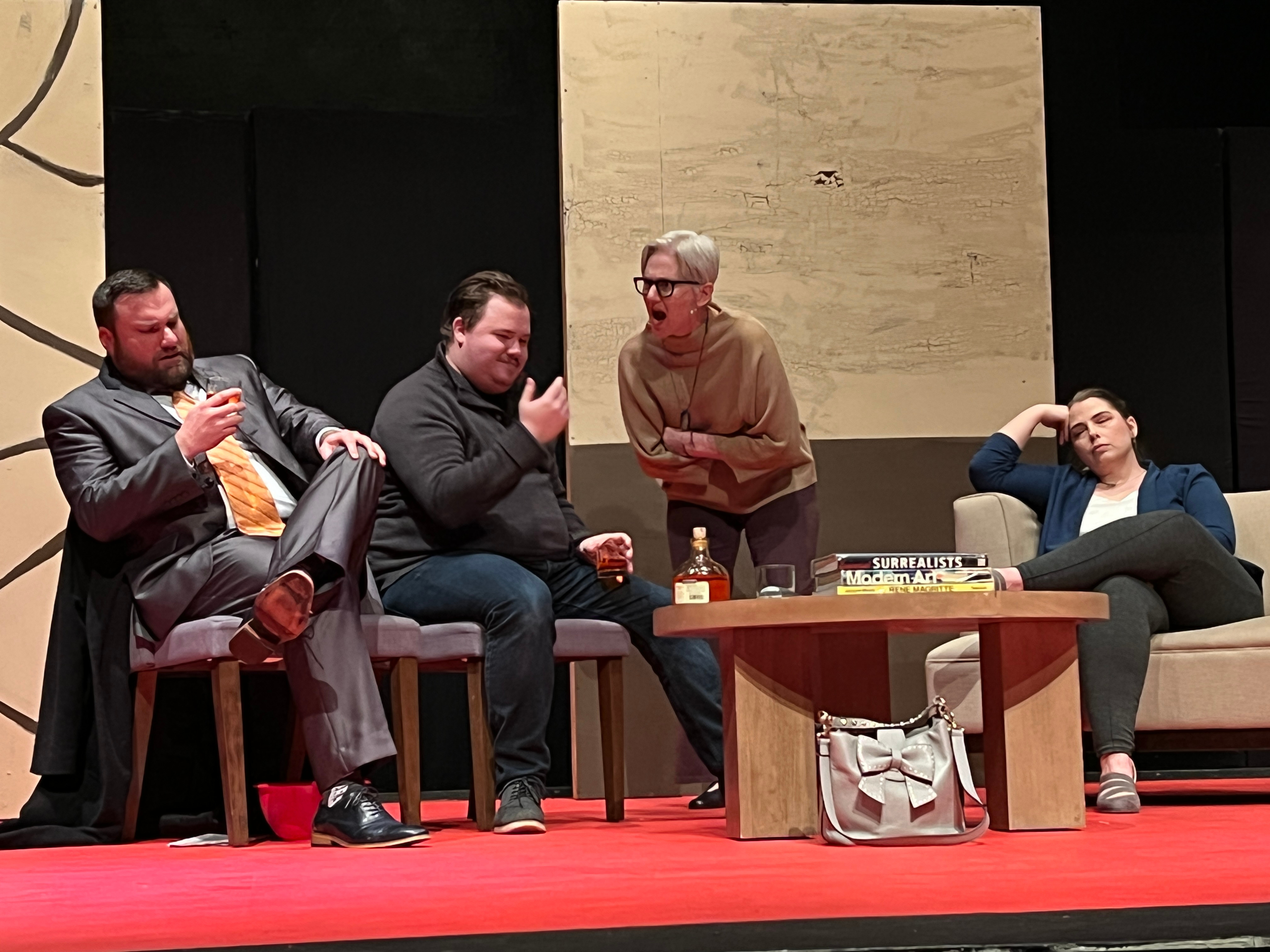 If a guy says something you don’t like about a person you care for, throw a tantrum. Or better yet, slap him in the face!

While the protagonists in the play God of Carnage never stoop to the law of the jungle that rules the life of miscreants like Will Smith, they do throw tantrums. Maybe that is why this play by Yasmina Reza won the Tony Award for Best Play in 2009. To show it had trans-Atlantic appeal, it also won the Olivier Award for best comedy that year. They really should have a separate award for ‘dark comedy’ as this one is not exactly a laugh-fest.

We have here a 4-person play. Dawn Calvert plays the role of Annette, wife of Alan Raleigh who is played by Rob Novack. They are the parents of Benjamin, a kid who knocked out the two front teeth of Henry. Henry’s parents are the Novaks: James Pearce plays the father Michael, while Robyn Gammill plays the mother Veronica. The kids never appear. Rather are the figurative foils wielded by the parents in a fencing match that lasts 75 riveting minutes.

At first, they merely spar, feeling each other out with a thin veneer of politeness. At this stage, safety tips are still firmly fitted to the foils. As unfortunate words are said by one or the other, tips come off and we witness a full-scale fencing match. But wait! In a surprise twist, allegiances shift. The men bond over a glass of brandy while the women hector their spouses just as viciously as any in a Shakespearean play (the photo shows Veronica hectoring her husband Michael). This is perhaps not too surprising as Gammill has played Lady Macbeth. Both Pierce and Calvert have also played in the Bard’s plays, and this underlying experience certainly informs their approach to these roles. All four actors offer convincing and angst-riven portrayals of these deeply flawed characters: Michael admits he is a Neanderthal, and Alan admits his son is a savage. If you ever wondered what a cross between a Neanderthal and savage might look like, all you had to do was watch the Oscars show.

At its most elemental level, this is a psycho-drama, words that are actually spoken by Michael. What is better, the permissive parents who have brought the aggressive Benjamin into the world, or the strict parents who have raised a kid who can’t or won’t fight back? Michael seems to have the last word on both sides of the coin. “Children consume our lives and then destroy them.”

One minor error seems to be embedded in the text of the play. One of the couples use the term “Woof Woof” to describe the other, implying it derives from the Doggie in the Window song by Patti Page. But in that song, the dog noise we hear is “Arf Arf.” This is a translation error, as the original play was in French. There, the nickname was “Toutou”, taken from Via con me, an Italian song by Paolo Conte.

I highly recommend seeing this play in Lockhart. All the actors deliver very fine performances in a play that will always remain topical.

The play runs thru Apr. 9, 2022. Tickets at gaslightbakertheatre.org

Location: The Gaslight Baker Theatre in Lockhart, about 45 minutes south of Austin. Have some popcorn there, it really is excellent! 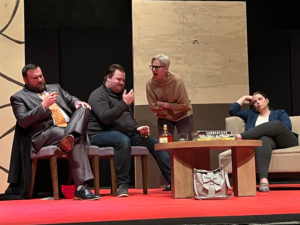