May 31 is the date for the premiere of the TV mini series Good Omens. All 6 episodes will be released that day on Amazon Prime.

Good Omens made a big splash at SXSW in Austin in March, and Sun News was there to capture all the excitement. SXSW even set up a large “Garden of Eden” outdoors complete with the apple tree. I saw several women unwisely reach up to pluck an apple from the tree. The Garden even had a mockup of the 1926 black Bentley featured in the mini series (see photo below).

“This is a buddy movie,” said actor David Tennant, referring to the two main characters Crowley (a demon played by Tennant) and Aziraphale (an angel). “They complete each other. There are not a lot of scenes they’re not with each other.” Tennant is best known as Dr. Who, and there is a nod to that TV show in Good Omens: the famous scarf always sported by the fourth Doctor is worn by one of the characters.

The show tackles big themes  “What does it mean to be human?” and “What is the apocalypse?” They may not have provided an answer, but a troupe of singing nuns entertained the SXSW audience as they got to see the cast during an appearance at the Zach Theater.

In development of the 1990 novel Good Omens, author Neil Gaiman said he had a character Aziraphale. His co-author, Sir Terry Pratchett, “split that character in two: the good and evil. The joy of this show is watching them do this amazing dance around each other.”

At SXSW, actor Michael Sheen (who plays the angel), spoke about Gaiman’s creation. “As first and foremost a fan of Neil’s work, what resonates for me is that it’s about people. Our flaws and foibles are our greatest strength as a species. That trust in humanity, that ability to lean into people’s flaws allowed us to feel so included and express ourselves.”

John Hamm plays the angel Gabriel who was only mentioned in passing in the book. “I play the no2 guy to the Big Guy,” Hamm said in Austin. “What he really is is a terrible bureaucrat. That made it challenging. I made it like ‘shitty boss’ from the head office as a theme. The costumes lent an air of an impeccably put together person who is a buffoon.”

Gaiman has a cameo role in episode 4. “I’m a retired show runner, and in my retirement I’m thinking of taking up writing!” In real life that is exactly what Gaiman says he now plans to do: resume his writing career. Gaiman had a lot of control, as creator of the book and show runner of the mini-series. “What was nice about this is I didn’t have the job of keeping it consistent but I had the responsibility of deciding what got shot and what didn’t. If you’re the writer in TV your control extends only to the moment you start typing. The gratifying thing about Good Omens is because I made myself show runner, nobody got to out-write us,” he said, referring to himself and the director Douglas Mackinnon.

At SXSW Mackinnon said that Gaiman worked out a hybrid method for creative control of the show with him. “Suddenly you’ve got a recipe of making something really great,” Mackinnon explained. “It was a genuine collaboration. Sounds simple but we loved it. Everybody walked away from the show thinking they had done something special.”

In a separate appearance, Gaiman spoke to another audience at SXSW about his 2001 fantasy novel American Gods. “You write fiction to ask questions. When I moved to rural Wisconsin I had expected one kind of American experience but had another kind of experience. For example I saw a roadside attraction advertised as the largest block of cheese in the world. It was a huge truck with a glass side showing a replica of a 1961 block of cheese from the World’s Fair. I’d say to people, ‘isn’t that weird?’ They would say ‘no.’ American Gods was me trying to figure this out.”

He reminisced about Pratchett, who died in 2015. “Terry in later years said I sent him 500 words as the beginning of Good Omens. I found it recently and it was 5000 words. He said ‘you can either sell it to me or we can do it together.’ Anyway Terry took it and made it 10,000 words.” Gaiman said the magical thing about writing Good Omens was “there was an audience: Terry was my audience.” When it came time to create the miniseries, Gaiman said “Terry wrote me and said ‘you have to do this. You are the only sane person who has the same passion for the Old Girl as I do.’ So it became my mad passion project.”

Gaiman expressed his deep sadness that Sir Terry is not here to work on the Good Omens project. “It was like table tennis when we were writing. The biggest challenge was not having Terry anymore.” But his spirit stayed with Gaiman throughout. He said jokingly “there have been many times in the past 2 years I have cursed Terry. But we pulled it off.” 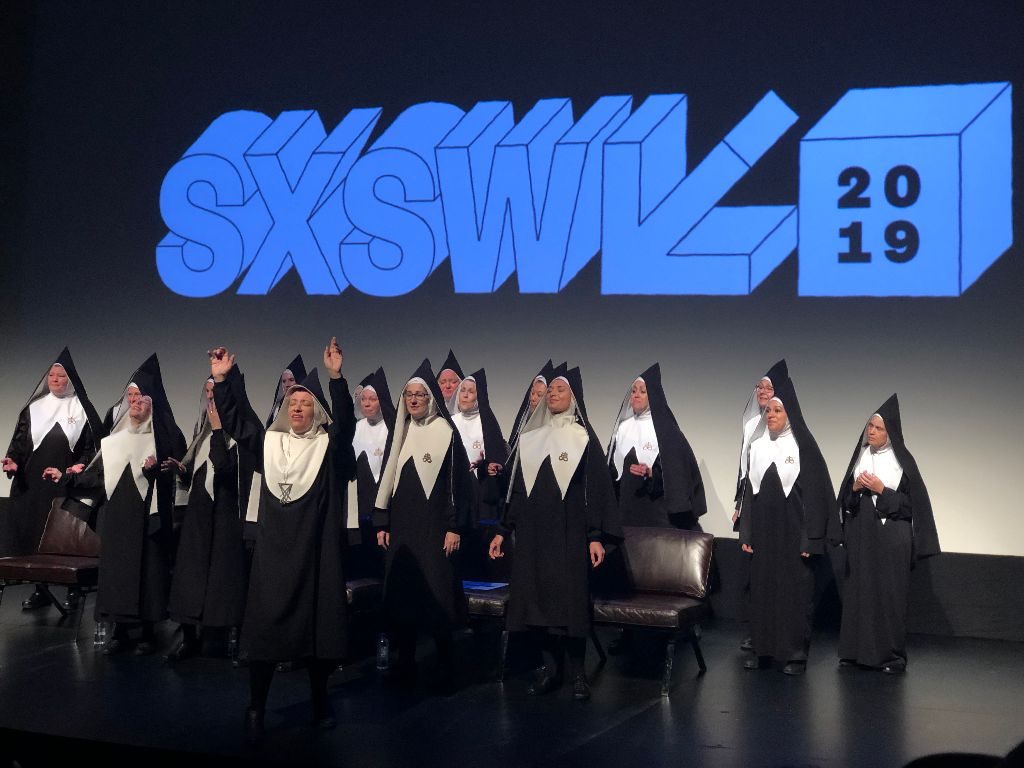