Most people will be familiar with Sister Act as a landmark Whoopi Goldberg film of 1992. Its adaptation as a stage musical premiered in Pasadena in 2006, with continuing success in the West End of London in 2009 and Broadway in New York in 2011. In both London and New York it was nominated for several awards, including Best Musical, but it won nothing.

The reason becomes obvious when seeing Sister Act at the Georgetown Palace Theatre, where it is now being performed. While the actors and singers give it their all, there is a certain spark missing from the musical. As the Hollywood Reporter review stated in 2011, “the writers short change the show on heart,” missing opportunities to bond the central character, Dolores, to her singing cohorts.

This underlying fault cannot be overcome even by this energetic cast, but that is not to say it lacks fun and joy. Only a sourpuss could fail to be moved by Kendra Christel’s performance as Dolores, the black lady who witnesses a murder by her mob boss lover Curtis. She is being protected by the police by being placed in a convent, in preparation for her trial testimony. How she raises the sisters to the heights of musical stardom is a delight, especially as she battles the Mother Superior, played with just the right dash of good-natured disdain by Cathie Sheridan. 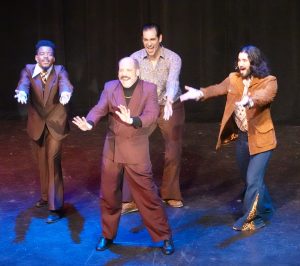 The musical is set in the 1970s of Philadelphia, with the Philly soul sound replacing the Motown featured in the movie. The differing soundtrack lets the characters here take on new dimensions, including a really sleazy Disco dance that was wildly appreciated by the Georgetown audience.

Costume design by Ellen Simms is outstanding. It was especially fun to see the cop Eddie, played by Isaac Arrieta, switch from his uniform to a wild disco outfit, and back again to his uniform, all live on stage.

Sister Act has become an iconic element in American culture. I spoke with two ladies visiting from Tyler, Texas who told me that 20 years ago all the teachers of St. Gregory elementary school there donned nun’s habits and performed Sister Act for the school kids. I saw a few kids in the Georgetown audience, so by all means bring them to this family-friendly musical before it concludes.

Sister Act (directed by Scott Shipman) is being performed through May 19, 2019.

Photo1: Kendra Christel, just left of centre, with the nuns and (in the red robes at front) Erik Freisinger as Monsignor O’Hara.

Photo2: Neal Gibson as the villain Curtis, surrounded by his minions in crime. 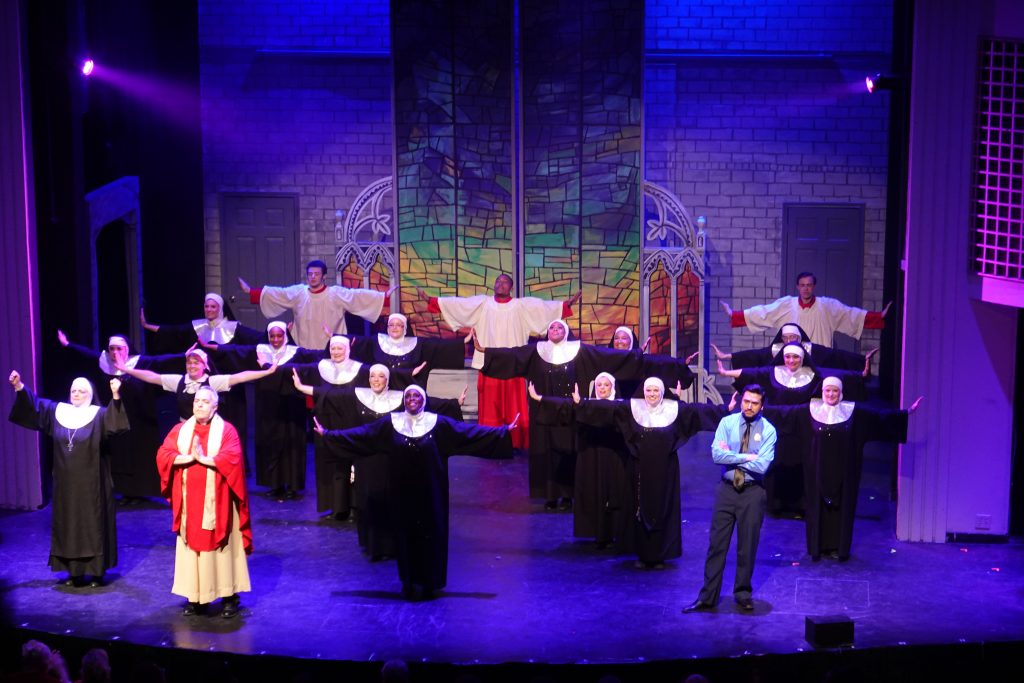