This play about physics is, to use words uttered within the play itself, “a wild improbability.” Written by Michael Frayn, Copenhagen premiered in London in 1998. The Broadway opening in 2000 was crowned with success, garnering the Tony Award for Best Play.

In a review of Frayn’s 2007 book The Human Touch, John Banville wrote “From his acquaintance with philosophy and his readings in the work of physicists such as Werner Heisenberg and Niels Bohr – the main characters in Copenhagen – he has got hold of a simple fact about the world, which is its indeterminacy.” Frayn, now 85, is one of England’s most celebrated playwrights and novelists.

The compelling cast of Copenhagen at Austin Playhouse is David Stahl as Werner Heisenberg, Ev Lunning Jr. as Niels Bohr, and Babs George Bohr’s wife Margrethe. The rapid fire delivery of the technically sophisticated dialogue was the key to keeping the audience focused. Every play requires memorisation by the actors, but this play may be unique in its scientific jargon which must task any acting talent.

The set is essentially nonexistent, consisting of three chairs they occasionally sit on. The only decoration is the pattern of atomic orbits traced on the circular floor of the stage. Thus there is no distraction as one is alternately pulled in one direction by Bohr, the Danish physicist and older mentor, and another direction by the German scientist Heisenberg, Bohr’s junior in years but not in intellect. Both developed much of our fundamental understanding of atomic physics that led to the development of the atomic bomb, which is the very issue Copenhagen struggles to convey. As Margrethe says, “from those two heads the future will emerge.”

Plays about multiple perspectives clashing with one another are not new, but Copenhagen is unique both for its grounding in physics, and the fact it is based on what really happened. Attention generated by this play compelled the Bohr Archives in the city of Copenhagen to unseal all the documents related to the 1941 meeting between Bohr and Heisenberg that is in contention here. As Heisenberg recalled in one of these documents from the 1950s, Bohr said to him “Do you really think that uranium fission could be utilized for the construction of weapons?” I may have replied: ‘I know that this is in principle possible, but it would require a terrific technical effort, which, one can only hope, cannot be realized in this war.’ Bohr was shocked by my reply.”

Aside from the physics, Frayn actually telegraphs the psychologically fraught demon that lurks in the background of the interplay between Bohr and Heisenberg about the wisdom of creating an atomic weapon in the 1940s. Heisenberg mentions “Elsinor, the dark inside the human soul.” Here it has two levels of meaning. Since Bohr is Danish, he is familiar with the Danish city Elsinore, but he is equally aware Shakespeare set his play Hamlet in that very place. The moral dilemma they are dealing with is unmasked by Margrethe. To be, or not to be? For Heisenberg, he wrestled with whether he should be loyal to Germany (under the Nazis) or to humanity that would be put at risk by creating an atom bomb.

Don Toner, director of the play, told me in an interview he thinks Copenhagen “is one of the finest plays ever written. In the end nobody wins or loses. It’s all about life and death.”

While the play would have benefited from a shorter runtime, Frayn cannot be faulted for having created a fascinating play that presents a great challenge to any audience member who does not have a degree in physics. Those who feel inspired to delve further into the mind and world of Bohr should get the 2017 book “Niels Bohr and the Philosophy of Physics” by Bloomsbury Press.

Photo by C. Cunningham: A large wall at the Austin Playhouse is filled with this diagram that was inspired by atomic orbits. Each roundel in the display commemorates a specific event in the lives of Bohr and Heisenberg that are mentioned in the play.

Photo of the cast by Lara Toner Haddock

Copenhagen is on at the Austin Playhouse through April 28, 2019 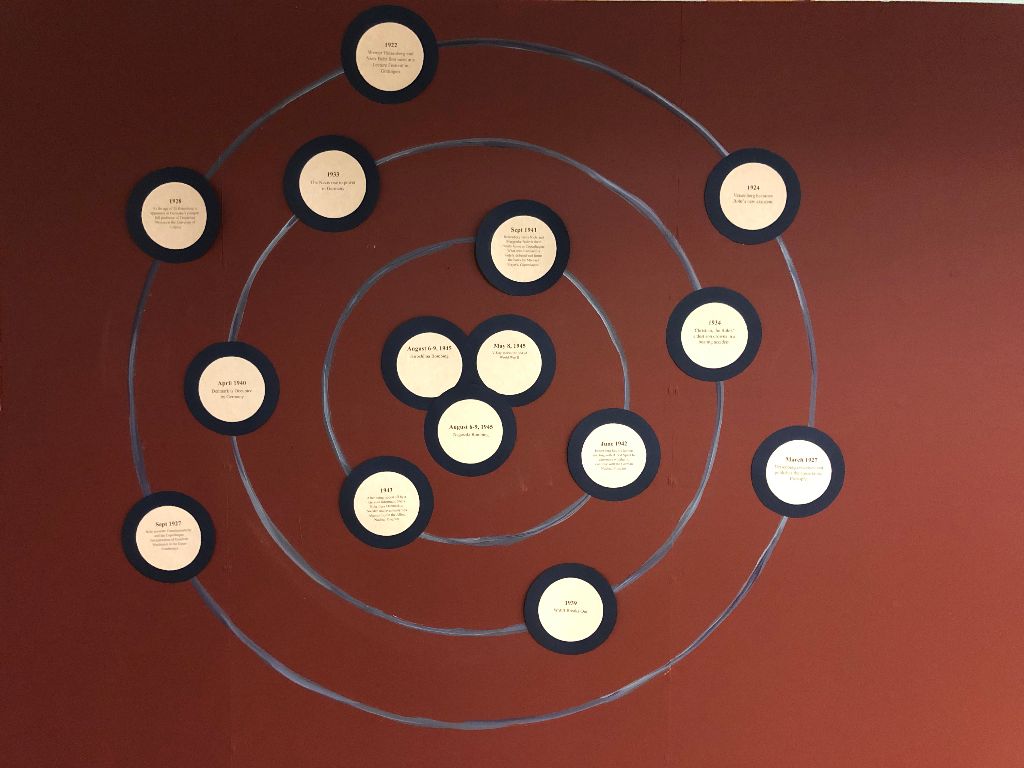