If you ever wondered what Star Trek on steroids would be like (and who hasn’t!) pay a visit to The Gaslight Theatre in Tucson. They are currently staging Space Trek, a version of Star Trek that is both musical and cartoonish. While such a pastiche could easily become an event as appealing to a human as a Klingon feast, Space Trek not only rescues itself from such a fate, but actually goes where no man has gone before.

Mike Yarema stars as Capt. James W. Quick of the Starship Excelsior. This is the full-on version of Capt. Kirk by William Shatner, with all his mannerisms, staccato speech, and womanising duly exaggerated. As in the original Star Trek, he has two main foils: Dr. McCrea (played by Jacob Brown) and Mr. Sprock (Jake Chapman). In Space Trek, however, the captain has a third foil who drives him mad: chief engineer Monty. It appears the chief engineer has been nibbling on dilithium crystals, as Joe Cooper takes this normally level-headed Scottish character and transforms him into the lead comedic character of the starship. Quite hilarious.

The role of Yeoman and Communications Officer is here combined in the person of Lt. O’Hara. Heather Stricker sports the tall blonde hair to great effect. While she was certainly on Capt. Kirk’s radar on the TV show, his amorous advances here are directed towards Princess Serena of Mylanta, played by the gorgeously clad Devyn Garrett.

Of course one cannot have a show with just the good guys. The protagonists are Voltaire, the Ruler of Zantac (Charlie Hall), Commander Titan (Dave Orley) and Ambassador Risa of Zantac (Erin Thompson). Hall, in Klingon-esque costume, reminds us just how much we love to hate Klingons. Orley and Thompson round out the trio of cosmic villainy that is so deliberately over-acted they don’t even mind being hissed and booed by the audience.

With its pill-popping references to Mylanta and Zantac, this is a space farce of the highest order even without the numerous musical numbers. These are derived from songs of the 1950s and 60s, with lyrics suitably altered for the play. If Dr. McCoy on the TV show had the good looks and the dance moves of Brown, he would have been a lot more successful in the game of love. As for Mr. Spock in the original show, he only got to let his hair down in one episode while under the influence of alien spores. Imagine him singing and dancing on the bridge – that is Chapman’s role, played with delightful abandon. Despite all the goofiness Space Trek actually has a plot. Naturally, only the fate of the galaxy is at stake!

This is a musical that should be performed at the annual Star Trek convention hosted by Creation in Las Vegas every August. Star Trek fans enjoy spoofs of their favourite characters, and this is the best I have seen. As a fan who has actually appeared on a Star Trek show (Deep Space Nine’s Dogs of War episode) Space Trek, with its fine sets and costumes, has my stamp of approval.

Kudos to those behind the scenes who have created such a delightful show:

Note about the cast: Some roles may be played by other actors in upcoming performances. I have only indicated the ones I saw.

Space Trek (written and directed by Peter van Slyke) will be performed thru Aug. 25, 2019 at The Gaslight Theatre, 7010 E Broadway Blvd, Tucson. 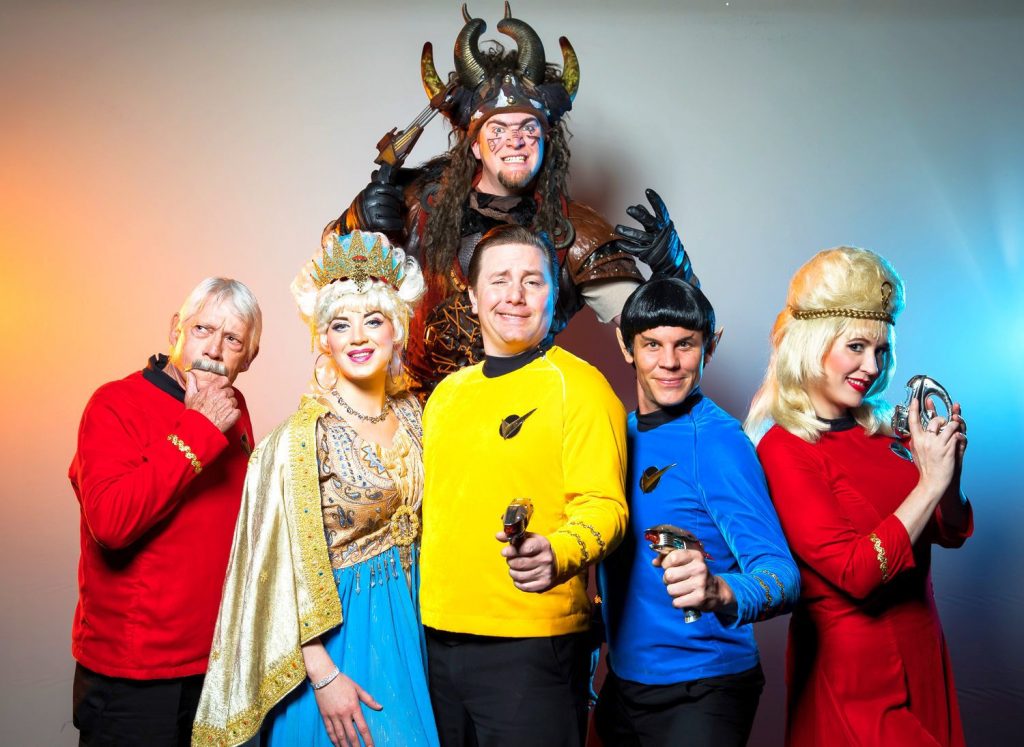