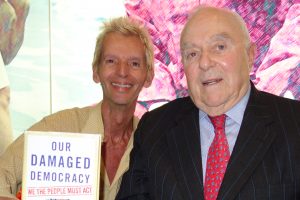 “There are no free crumbs in politics,” declared Joseph Califano Jr. at the LBJ Presidential Library in Austin.

Califano, an adviser on domestic policy to President Lyndon Johnson, was here to discuss the state of the nation, which is examined in his new book Our Damaged Democracy. He traces the current divided state of the nation to the fact “the three branches of government have lost their constitutional balance. Congress is crippled and weak, and the courts have become politicised.”

As for the executive, where Califano worked, the growth of power since he was there in the 60s has been tremendous, but equally portentous is the fact “every president finds less use for the bureaucracy.” The bloated White House staff is not helping things, In the late 50s and through the 60s, the staff numbered about 50 people. Now it is 3,000.

Focusing on the Congress, Califano observed with regret that “money really is crushing our public policy.” In conversation with legendary CBS news journalist Bob Schieffer, Califano put his finger on exactly what money he means: “Fund raising is really corrupting Congress.” He related the troubling figure of $30,000 as the amount a senator must raise every week he is in office just to get re-elected. For a member of the House, the figure is $15,000 a week. “They don’t have time to do their job and as a result they’ve let the president become the chief legislator.”

It is not unusual now for the president to sign a piece of legislation passed by the Congress with an added proviso that he disagrees with it and will not make an effort to implement it. Califano says the first president to do that was Reagan. “LBJ would never have done that: he would have vetoed the legislation.”

Califano traces the gridlock in Congress to a few rich people who bankroll politicians with a view to promoting a particular point of view on contentious issues. When these politicians get elected, they are already rigidly in opposing camps. “They’ve turned compromise into a 4-letter word, so nothing gets done,” observes Califano.

On the subject of the media, Califano asked Schieffer a poignant question: “Why is there no Walter Cronkite?” Schieffer, who worked at CBS with Cronkite for many years, explained that when Cronkite “became the dominant voice in American media, he was only competing against two other networks. People got their facts from just a few sources, and it was the same set of facts. We are no longer forming an opinion on the same set of data.” Schieffer sadly noted that “the country is more divided than any time since 1968.”

Despite the gloomy analysis, Califano at age 86 remains optimistic that the ills of the nation can be cured. The first step, he advised, “is to look in the mirror and vote in the primaries.” Both Hillary and Donald got their party’s nomination with less than 8% of registered Democrats and Republicans. “I believe deeply that if Americans understand a problem, it can be solved.”

Califano’s book, published by Touchstone, is $27.

Photo: Dr Cunningham(l) with Mr. Califano and his book