The Farce of Wrestling 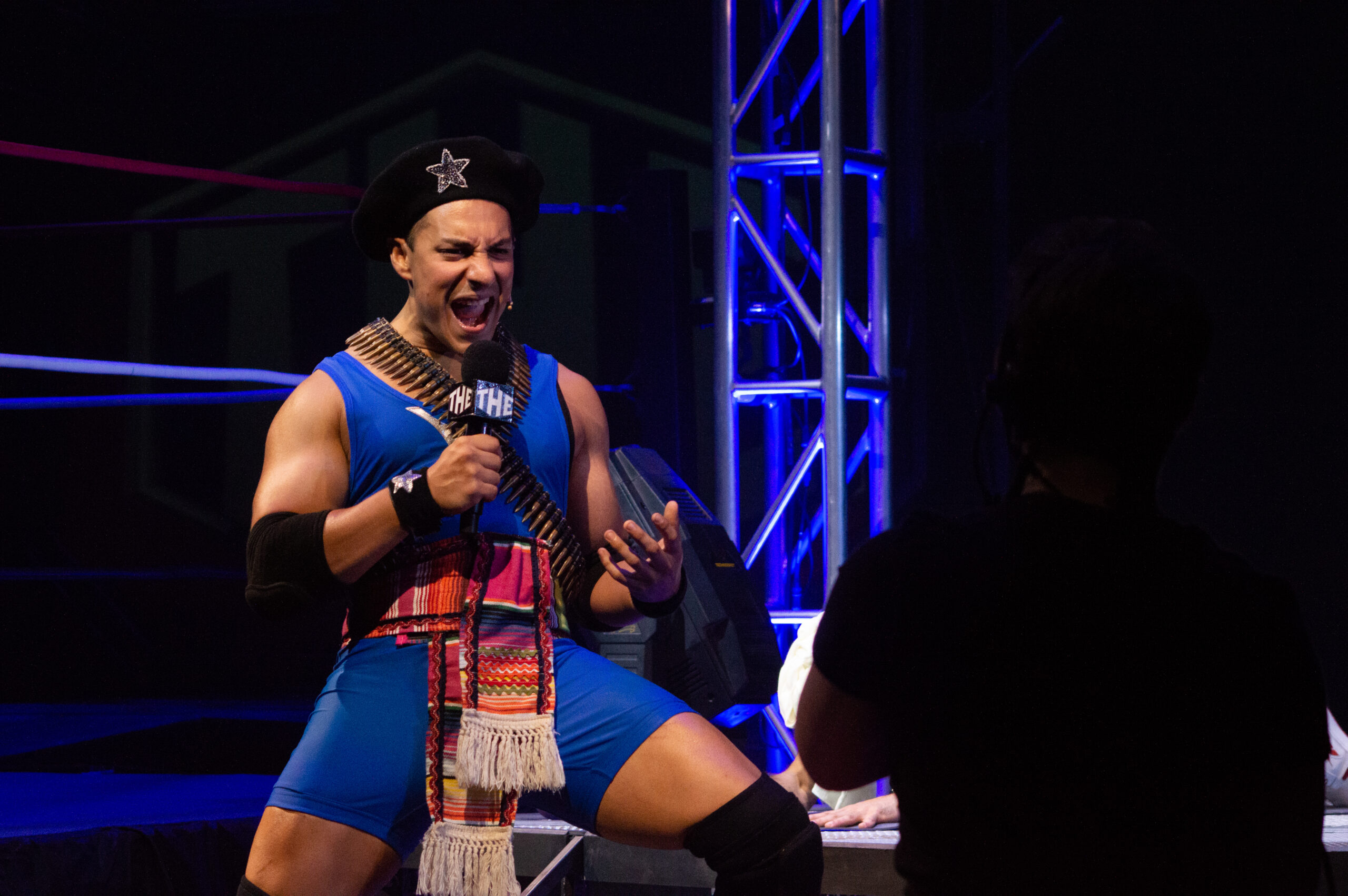 If you have any faith in the ‘sport’ of wrestling, you probably don’t want to see this play. It will shatter any illusions you might have.

It’s not really a sport, but rather a scripted spectator sport, where the winner is ordained before the match begins. That, at least, is the premise of the play currently at Austin’s Zach Theatre.

The story of The Elaborate Entrance of Chad Deity is told by one of the actors/wrestlers, Mace Guerra. He is played by Nicholas Robert Ortiz. Not just a muscle man, Guerra is a wrestler with a thorough knowledge of wrestling. He has been trained as the opponent who always loses, the foil in this play for a black wrestler with the unlikely name of Chad Deity. With a name like that, he naturally regards himself as a wrestling god. He is played with reckless abandon by Hollis Edwards III, dressed in semi-royal robes and a crown on his head. Chad is actually a bad wrestler, but he has charisma.

The atmosphere of a wrestling match really requires a full house of raucous spectators, which was sadly lacking at the Zach, which had less than half of a full house when I attended. This is unfortunate as this is a fine play that reminds one of another sports-based play, Take Me Out. It premiered in 2002, while this one got its start in 2009. The earlier play also had a particular actor who narrated the story, and like the baseball play the Chad Deity play tackles racism head on. In this case, the wrestling promoter (played with appropriate swaggering mendacity by Andre Martin) molds a guy from India (played by Herman Gambhir) into an evil Muslim who spouts hate speech to rile up the spectators who pay to watch the wrestling matches.

If taken at face value it would certainly cast wrestling in a bad light, but this is so clearly such a broad farce that one is more amused than repelled by it all. This actually humanizes wrestling by making it even more theatrical than it already is. This theatricality is emphasized by the wrestling promoter, who actually holds up an applause sign to get a rise from the theatre audience. And Mace sometimes wears a mask, a foil to hide behind his own personality. In reality, he’s a winner, not a loser.

The cast is rounded out by Danny Zigal, who portrays three characters that play on the American psyche. In this he is draped in costumes that evoke patriotism; kudos to the costume crew including Sabrina Entrekin and Estrella Martinez. Great job! Another integral part of the play is the lighting effects which are very fine. Sarah Elliott is the lighting design assistant; Ballet Austin supplied supplemental lighting.

Even though this is largely a play painted with very broad brushstrokes, there are some subtleties if one pays close attention. Within every farce there is a moral.

The Elaborate Entrance of Chad Deity in playing at the Zach Theatre until Oct. 23, 2022. Directed by Jerry Ruiz.