The ‘Me Too’ movement actually started 2400 years ago. Aristophanes tells of a time when the women of Greece rebelled at being regarded only as sexual objects. The resulting play, Lysistrata, is just as relevant then as it is today.

“Women are experiencing very similar oppression like we haven’t seen in decades,” one young lady told me during a recent performance of the play by Austin City Theatre. “Considering the state of political affairs,” she said, “it’s an apt time to stage this performance, especially in a city like Austin with a very active young community.”

Despite the anachronistic humour, the play still resonates with a modern audience. Both young men and old women at the performance I attended were clearly enjoying it. But Lysistrata is more than a series of bawdy jokes (“we’ve come to dicker about peace” one Greek man says as he sports an enormous erection). 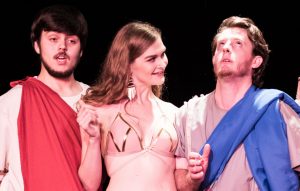 The woman this play is named for, Lysistrata, has a particularly effective line: “We’re perfect raw material for tragedy.” Keeping in mind this is a comedy, Aristophanes is giving us a crucial clue here to what he really intends. As director Jeremy White says of this production, “Aristophanes wrote about the dream of Peace at a time (411 BCE) when it didn’t seem like a possibility.” The original line by Lysistrata reads “Not for nothing are the tragedies about us,” but this play is based on the translation from ancient Greek by Douglass Parker, Professor of Classics at the University of Texas in Austin. Parker, who died in 2011, did this translation in 1964 and it has been the source of more than 200 stage productions of Lysistrata since then. This performance at the Santa Cruz theatre in east Austin has a dash of updates, including a reference to Wonder Woman!

A truly rollicking good show, with 14 cast members led by Lysistrata herself, played by Katie Beth Stubbs. She brings her Shakespearean acting abilities to the role, lending it the right degree of gravitas as befitting a peacemaker.

Ticket information can be found at www.citytheatreaustin.org