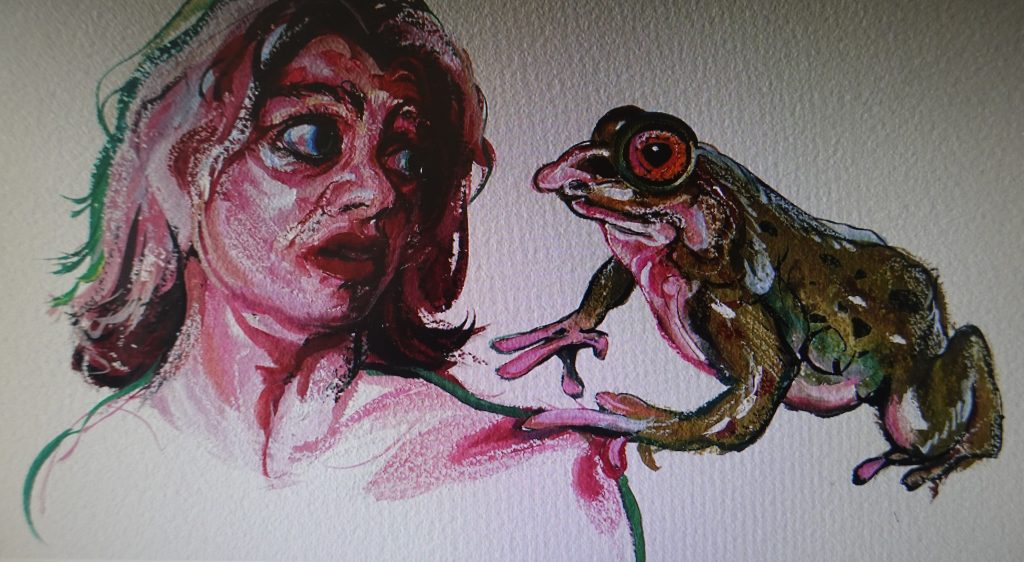 Even when the first volumes of Grimms’ Fairy Tales were published in the early 19th century they were not regarded as suitable for children, even though they were entitled “children’s tales.” As Ballet Austin artistic director Stephen Mills explained, “there was such a disconnect from the stories I heard as a child: they were cleaned up by Disney, sadly I think.” Some of these tales are grim indeed, and they form the basis for this world premiere ballet performance of Grimm Tales at the Long Center in Austin.

Of the tales produced by the brothers Grimm, numbering more than 200, three were selected: The Frog King, Snow White and The Juniper Tree. Mills related the impetus for this new work was an exhibit of drawings at the Blanton Museum in Austin three years ago, when Natalie Frank showed 50 works based on the Grimm Tales. “It occurred to me none of the really dark stories” had ever been staged, said Mills. “It was then we began to talk about a collaboration, and together with Associate Professor Edward Carey, a story teller at the University of Texas, we selected three tales.” Combined with an orchestral score by Graham Reynolds (“one of the most dark and amazing scores I’ve heard”), the result is an interpretation in ballet of stories that relate to sexual hunger (Frog King), the hunger for beauty (Snow White) and the hunger for power (Juniper Tree).

That interpretation can only be described as a landmark event in early 21st century ballet. The fusion of the visual, the dance, and the music is powerful, and certainly rose to the level of shocking at times. The ever-changing Chagallesque backdrop by Frank against which the dancers perform gives us a portal into another world, the fairy tale world spun by the Grimm Brothers. One of these is shown here, evoking the fraught relationship between the Princess and the Frog King. He will become your favourite amphibian before the night is over. As Shelley wrote in Prometheus Unbound, “wouldst thou think that toads Could e’er be beautiful? yet so they were.”

Ballet is usually like a silent movie, sans subtitles, but in Snow White the backdrop does remind of the famous phrase “Mirror, mirror on the wall…” And in The Juniper Tree the horrible vision of a hatchet murder is put on full view, as if the actions of the ballet dancers were not graphic enough. Frank uses a human eye in some of her paintings displayed on these backdrops. “While looking at it, it’s looking at you,” she said. “Like art it interacts with the viewer.”

In Snow White, we see her relentlessly pursued by the Evil Queen, who looks in the mirror to find the fairest one of all. In the ballet she repeatedly passes through the mirror, held by two male figures covered from head to toe in black. For her, the flickering uncertainty of the world of appearance becomes an imprisoning nightmare of uncertainty.

The final tale told, The Juniper Tree, is defined by the music of Reynolds. Here he paints a dissonant landscape of angst and disorientation, a dark place where murder is the only release. Reynolds said “I think of live music and recorded music as two different art forms.” For this ballet, he treated the majority of the process as recorded music, which he then “deconstructed for live music, although a few things were left in recorded form.”

Tremendous credit must be given not only to the entire Ballet Austin company but to the key dancers in the 80-minute performance: Aara Krumpe as the Evil Queen and Ashley Lynn Sherman as Snow White in Snow White; Ian J. Bethany as the Son and Bird in The Juniper Tree; Jaime Lynn Witts as the Princess and Oliver Greene-Cramer as the King in The Frog King.

For information on future offerings at the Long Center, visit www.balletaustin.org