For someone who has been dead for 502 years, Raphael still exudes a superstar aura in the art world. Together with Leonardo and Michelangelo, they are the Great Triumvirate, the undoubted masters of Italian art whose brilliance burned everyone else to a crisp. They ARE art.

Visitors to London now can see the greatest Raphael exhibit of this generation. On display at the National Gallery, it brings together works from many art museums and some private collections. Even The Queen has loaned artworks for this exhibit.

This is the first Raphael exhibit outside Italy to encompass all aspects of his artistic activity across his entire career. In so doing, it allows the visitor the first chance to experience the full spectrum of his creativity.

When he was only 19 or 20 he painted Saint Sebastian. It is the first painting one encounters in the exhibit. Even those not expert in art can immediately realise they are looking at a masterwork. The delicacy, the emotion, the beauty: all unsurpassed in the hands of a teenager in the year 1502.

Most of his paintings deal with Biblical themes, but one that is heavily influenced by English myth is St. George’s triumph over the dragon. Done in 1505, it was likely painted to mark the investiture of Urbino’s ruler into the English royal Order of the Garter, whose patron saint is St. George. Raphael was a native of Urbino. The scene is not for the faint-hearted. St. George has already broken his lance in four parts; three are on the ground, while the fourth is buried in the dragon’s breast. The beast is making one last lunge at the mounted saint, whose sharp sword is ready to come down to end the battle. In the background, we see a young woman dressed in red fleeing the horrific scene. The horse is clearly modelled on an ancient sculpture, showing his debt to Greek & Roman sources; it should be compared to a red chalk drawing of 1515 of an ancient Roman horse (on loan from the National Gallery in Washington DC).  It was about this time that Raphael was given oversight of the excavation of antiquities in Rome. As these works depicting horses are not shown side-by-side, the viewer must do some comparative analysis while walking from one room to another. I recommend backtracking before exiting to gain a full appreciation of what is on display.

Also from 1505 is a painting of another saint (Michael) slaying another beast (Lucifer in the guise of a dragon).  It was a bad year for dragons!

The lead photo with this review is An Allegory (Vision of a Knight), dated to 1504. We see a young knight, encountered in slumber by two female figures. The one holding a book and sword embodies Virtue, while the other figure personifies Vice. Unlike other such artists of the period, Raphael does not appear to be exacting a judgment here; rather he presents Virtue and Vice as unavoidable aspects of life. The demarcation between the two is starkly represented by the thin tree shooting up right in the middle of the scene. What strikes one about this and Raphael’s other paintings is the vibrancy of the colours, apparently unfaded after all these centuries.

Amongst the many drawings here is one from 1505-06 entitled Study for a Portrait of a Young Woman. Clearly, it is the same pose as Leonardo’s Mona Lisa. Raphael was known to have closely studied the work of Leonardo, who died just a year before Raphael. Many of the older artists’ portraits served as the basis for Raphael’s portraits, and he also borrowed freely from Michelangelo, who survived Raphael by 42 years. An example of this is a study of the Siege of Perugia, also 1505-06, where the nude male figures can hardly be distinguished from those drawn by Michelangelo. This earliest part of his career is capped by a stunning self-portrait from 1506.

Several works here were created not by Raphael himself, but based on his drawings. This includes (from 1511-12) two large bronze circular reliefs; from 1521 a monumental tapestry based upon a small painting entitled Vision of Ezekial; and prints by Raimondi from 1515 showing Neptune Calming the Storm, and The Judgement of Paris. They derive from an early collaboration between Raphael and Raimondi.

A huge wall in one room is devoted to a faithful copy of the School of Athens, which of course cannot be moved from its place in the Vatican. What makes this room at the National Gallery especially stunning is the extraordinary portrait by Raphael of Pope Julius II, done in 1511, which is in the permanent collection here in London. One of the preparatory drawings for the Raphael rooms in the Vatican is shown here, from the collection of Queen Elizabeth II. Seeing works commissioned by this most famous of all the Renaissance popes, together with his portrait, is truly breathtaking.

The exhibit concludes with a literal fireworks display of portraits, making us rue the fact Raphael did so few portraits. Among these is Bindo Altoviti (done 1516-1518), a close friend of Raphael [at left in the large photo]; Lorenzo de’Medici (1518), the Duke of Urbino (rarely seen as it is in private hands!); and Baldassare Castiglione (1519), author of a book that codified the rules that defined what it meant to be a Renaissance gentleman [at right in the large photo]. 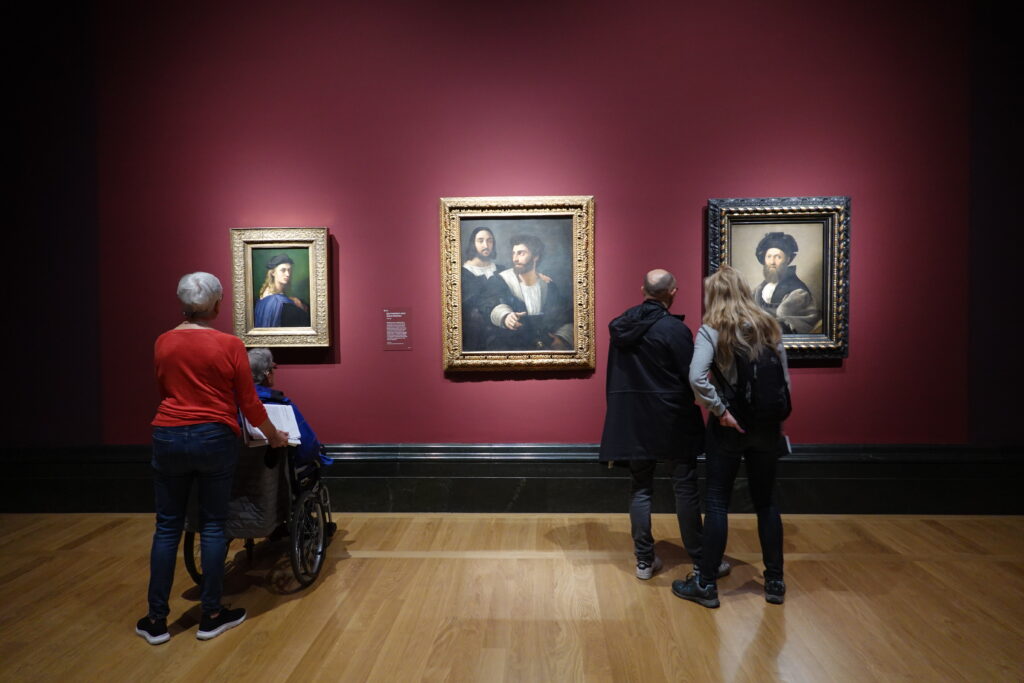 Seeing all these works together is a once-in-a-lifetime experience. Don’t miss it.

The Credit Suisse exhibit of Raphael is on display until July 31, 2022

An Allegory of a Knight (National Gallery, London)

Saint George; Study for a Portrait of a Young Woman (The Louvre, Paris)

A note for those wanting more Raphael in London:

The cartoons by Raphael are designs commissioned in 1515 by Pope Leo X for a series of tapestries in the Sistine Chapel illustrating the lives of St Peter and St Paul. Seven of 10 survive and were brought to Britain in the 17th century by the Prince of Wales, later Charles I. These cannot be moved, but can be seen at the Victoria & Albert Museum.

Murillo in Dallas: The Prodigal Son