Austin Opera is back! After a long Covid-related holiday, the chance to experience grand opera is once again available to sophisticated Austinites. Currently playing at the Long Center is The Marriage of Figaro, the most famous comedic opera in the canon. And it was composed by the greatest of all: Mozart.

With a winning combination like that, and all the esprit de corp associated with the re-emergence of opera from its chrysalis, it could hardly go wrong. It appeared to me on opening night that the house was full, or nearly so, which must be most gratifying to all the singers and the staff of Austin Opera who delivered a stellar performance of one of opera’s best-loved vehicles.

I went with someone who had never before attended an opera. She loved it, often laughing during the ludicrous and hilarious portions of the opera. Even though it was sung in Italian, she did not find the English subtitles above the stage to be an issue, even though she is not keen on reading movie subtitles on the TV screen.

Even for the cast, most are singing their roles in debut performances. Michael Adams, for example, is singing The Count for the first time. “Even if he is not particularly likable,” writes Adams, “I’ve enjoyed finding the elements of him that are appealing, relatable, or, at least, human.” He is certainly perfectly cast in a role that demands a very handsome man with a commanding voice.

For E. Loren Meeker, it is also a first time as stage director. “I’ve been able to build on my past Figaro experiences as assistant director, drawing on my insight and intimacy with the piece.” Conductor Timothy Myers writes that “creating Figaro with a cast primarily of role-debuts has been fun because nobody came with preconceived ideas of how it must be done.”

I especially liked the clean set design with multiple doors which reminded me of the TV show Laugh-In, where characters would pop in and out of doors and windows. Here, it allows stage entrances and exits to be very swift, while building to a crescendo of chaos as the Count wonders who has been fooling around with his wife. With its false accusations of infidelity, it is like Shakespeare’s Comedy of Errors from the 1590s. This opera dates from 1786.

A long-time opera buff declared that “half of the cast are really excellent,” singling out the count and countess (Michael Adams and Caitlin Lynch) as the vocal stars of the show. Lynch, he said, has great range and clarity, and this came through for the entire audience in her solo segment, which was quite riveting.

Featuring delightful and delicate duets, pathos-ridden solos, physical acting of high moment and costumes galore, The Marriage of Figaro (with the delightful bass Christian Zaremba in the title role) is a superb choice for Austin Opera to once again take center stage.

Visit www.austinopera.org for tickets, and put on your best clothes for the opera! 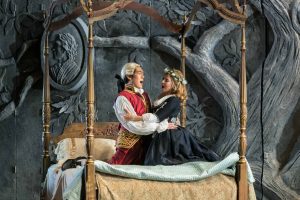