It is amazing that author Rick Reilly can say so much about Donald Trump’s personality based on a golf game. So much, in fact, it fills a whole book: Commander in Cheat.

Reilly contends you can learn a lot about a person by the way he acts on a golf course. His conclusions are hardly flattering, and appear very early on. On page 4 he describes Trump’s attitude as sleazy, morally bankrupt, but “pretty clever.” And on page 36: “The Guy who cheats on the course is going to cheat in business, or on his taxes or, say, in politics.” Reilly contends that T doesn’t even try to hide the fact he cheats. But he would never do it with a pro, right? “In fact, he did cheat with Tiger Woods,” the author tells us.

The author contends that pros estimate T’s handicap to lie between 7 and 10, but T insists his handicap is 2.8. He suggests that “If Trump is a 2.8, Queen Elizabeth is a pole vaulter.” For those who don’t know, The Queen is 93 years old. Reilly has sports credentials: he has been voted Sportswriter of the Year 11 times.

The book actually has tables of data, such as one showing Trump Scores in Televised Tournaments from 1993-2006. The data speaks for itself: “Proof Trump cheats is that whenever he plays in front of TV cameras, he goes from hero to hack.”

Have a look at the family crest T is sporting on his cap and golf shirt. According to Reilly, he appropriated it from a crest bestowed upon Joseph Davies in 1939 by British authorities. “Trump never asked permission to take the Davies family coat of arms.” The grandson of Joseph Davies told the author his grandfather “would be rolling over in his grave to think Trump was using his crest.” And so it goes on, a litany so bizarre one can only give him credit for being the most successful conman in human history.

I suspect few members of the Republican party will read this book. But for those who do not fear the unvarnished truth, this expose will provide more than a few chuckles and sad shaking of the head back & forth. It’s a fun summer read – go get it.

Commander in Cheat: How Golf Explains Trump ($28) is by Hachette Press 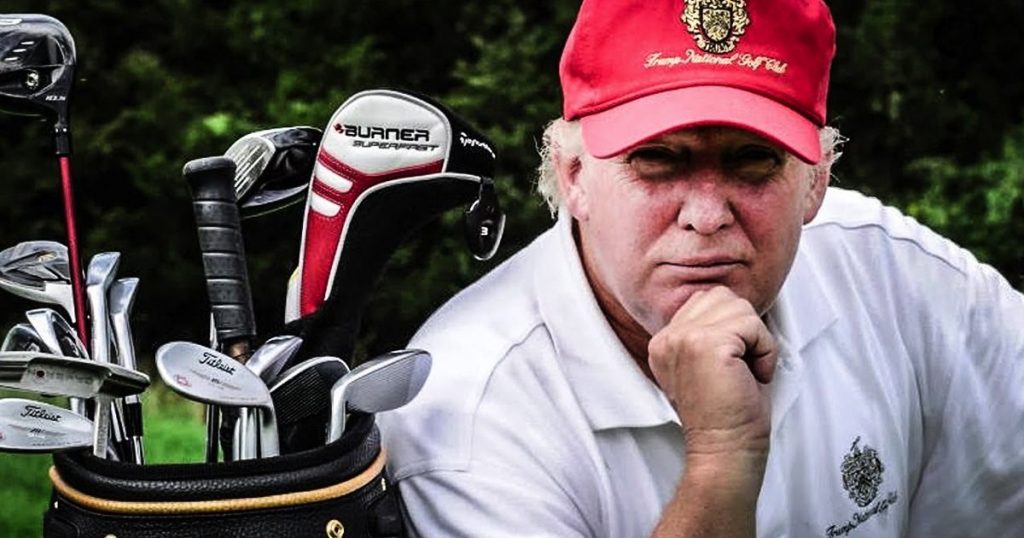