Phasers are set on stun in an improv show based on Star Trek, being performed now at the Hideout Theatre in Austin.

Since each show is different, based on a theme announced at the beginning, there are no spoilers in this review. The cast, whose names are given below, also rotate. Photos of the cast appear on a wall just outside the entrance to the theatre (inside the coffee house in downtown Austin), but the display is incomplete. One who is missing from the collection is the very tall Andrew Butler, who kindly posed for a picture with me in his Starfleet uniform. In the show I saw on July 13, Butler played the Vulcan ambassador to Cardassia.

The setting of the show was the planet Bajor, coincidentally the key planet near Deep Space Nine in the Star Trek TV show I appeared on in 1999. “I felt like there was still uncharted space to explore,” director Cat Drago says on the website about her inspiration for directing Make It So, which was the catchphrase used by Capt. Picard when he wanted an order implemented. “Star Trek: Next Generation had so much to say, and was so ahead of its time, I always found myself wondering what the power of improv could find in that universe.” 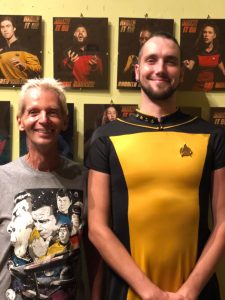 The answer is quite a lot. The role of artificial intelligence was tackled in the show I saw, with one crew member taking on the role of an android, like Data, only in this case her name is Lt. Byte. Wisely, instead of focusing on her as the obvious central character in an AI-inspired story, they weaved a complex tale involving a scheming Cardassian, a Bajoran terrorist, and a Vulcan.

Would “the universe work much better with AI” as one of the characters rather chillingly says? In an interview broadcast on the BBC this week, James Lovelock talked a lot about AI. Even though he just turned 100 years old, Lovelock (creator of the Gaia concept about Earth as a living entity) is still very much a forward thinker. He believes that AI creatures (perhaps androids like Data) that can think 1,000 times faster than humans will evolve and take over, but that humans will co-exist with them. Lovelock believes they will still need us as much as we need them.

The captain of the Starship Callisto in the improv show wonders (while under some alien influence) “We are always moving forward. What’s the point?”

Even though Make It So has tons of laughs, it is also inspired by such epic themes as AI and the point of humanity exploring space that Star Trek first brought to television in 1966. A terrific production, and right here in Austin. Star Trek Lives!

Make It So is being performed every Saturday through Aug. 24, 2019. 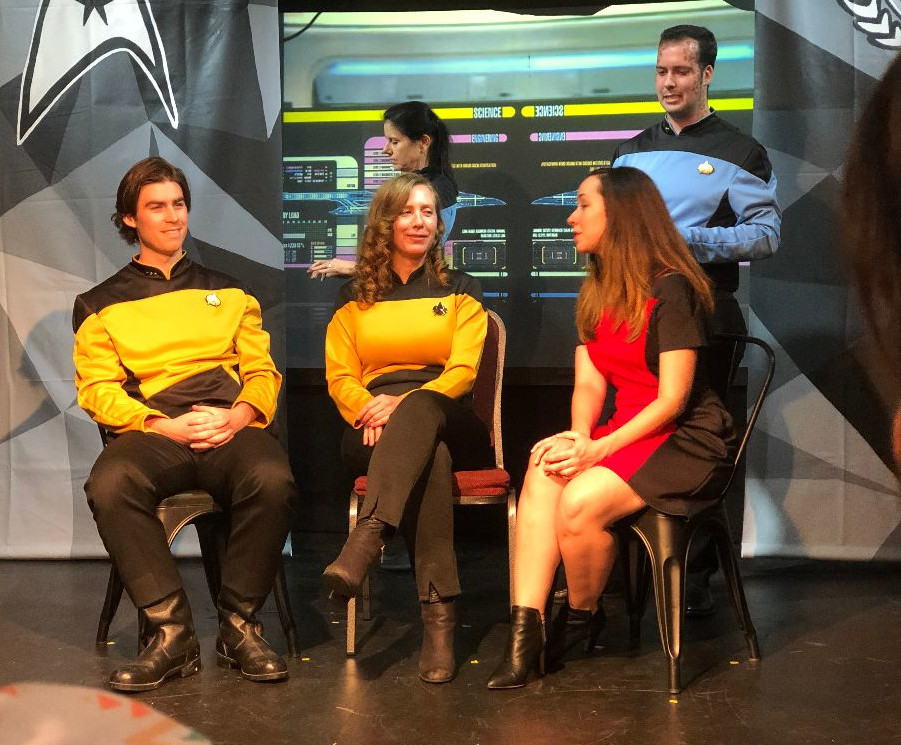