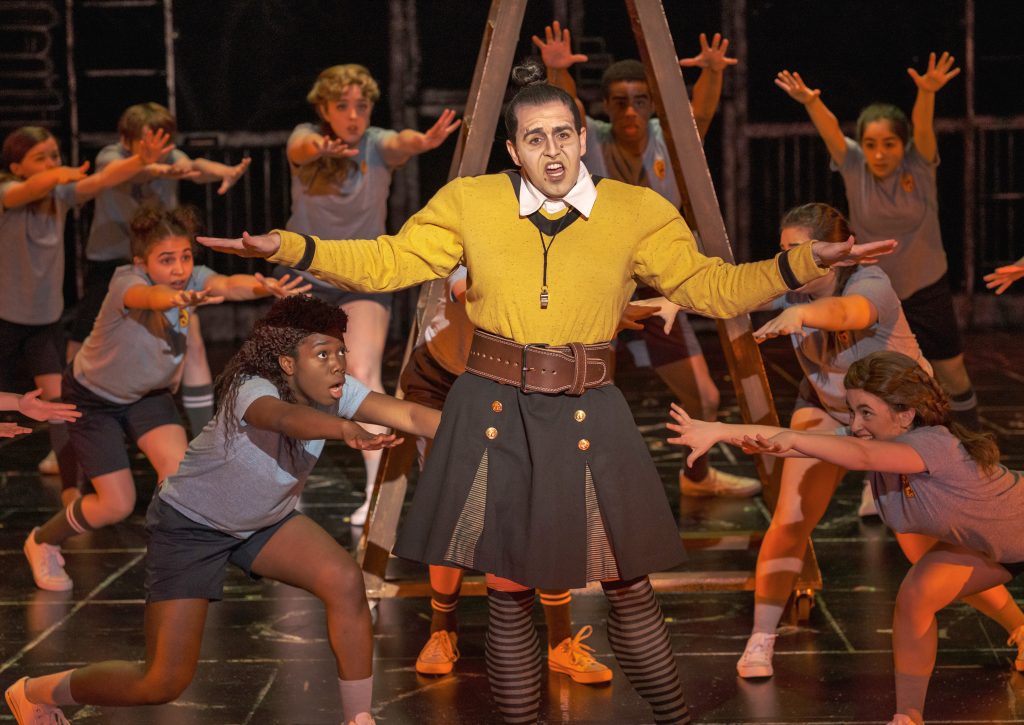 Imagine being assaulted on all sides by horrific parents in the evening and a sadistic school headmistress during the day. Then imagine acting out all of the abuse on stage, and calling it a children’s play.

That is Matilda The Musical, currently being performed at the Zach Theatre. This is one of the most celebrated plays of the century (so far). In England it won seven Olivier Awards in 2012, the most won by a single show up to that time (it was overtaken by Harry Potter in 2017). At the Olivier it won Best Musical, and at the Tony Awards in the U.S. it won Best Book of a Musical.

One can’t argue with success, but I wonder if the kids in the audience did not experience some sense of trauma after seeing the monstrous creation that was Miss Trunchbull, the headmistress, unleash vitriolic invectives and threats to the children in her school.

It all derives from the dark and brooding mind of Roald Dahl, whose macabre children’s books often featured villianous enemies of children. Their darkness rivals those of the Brothers Grimm in the 19th century, the subject of a recent production by Ballet Austin that included a hatchet murder and cannibalism. Being an English production, it certainly has its roots in Dickens’ Oliver: the most famous portrayal of a downtrodden child in the clutches of a maniacal authoritarian figure. As a more modern parallel, one might compare the trials of the girl Matilda with those of Annie at the orphanage under the thumb of the heartless Miss Hannigan.

One look at the character of Miss Trunchbull will disabuse you of any idea of relating to her. I say her, but she is played by a man, a tradition begun with the original Matilda musical. In this case the actor is the adorable J. Robert Moore who recently played an elf in the Santaland Diaries at the Zach. Here he has been transformed into a harpie, but his talent shines through the costume and makeup. This is a tremendous example of acting, worthy of an award. 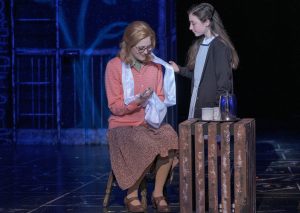 The character of Matilda is alternately played by Chloe van de Graaf and Alexa Nelan. The adult actors include the kind-hearted teacher Miss Honey (Laura Lyman Payne), the slightly hysterical librarian Mrs. Phelps (Lara Wright) and Matilda’s parents from Hell, played by Andre Martin and Sara Burke. The entire cast, including the rotating cast for the children’s roles, number about 40 people.

But one keeps coming back to Trunchbull, a cardboard cutout character of sadism. Her persona is unfortunately one dimensional as we never see the personal internal conflicts that generate interest in, or even sympathy with, an otherwise loathsome person. The playwright did not heed the dictum of Konstantin Stanislavsky (1863-1938), whose psychological model of acting has had a tremendous influence on theatre and film, when wrote “seek in the villain where he is good.” We are repulsed by her, but never really engage with her. In this she is like another haughty sadist, the Queen of Hearts in Alice in Wonderland (by another English writer, of course!). The fault lies with the character, not the actor who faces a mountainous challenge in bringing this dominatrix to life.

To find a few lighter tones you have to listen carefully to the lyrics. In Matilda’s solo Naughty, we hear her sing, “Sometimes you have to be a little bit naughty.” And in the song Bruce, you can hear about Dr. Who’s time machine the Tardis and the fact it’s bigger on the inside (a running joke on the TV show for decades). Many of the English witticisms in the lyrics will pass unappreciated by a North American audience.

The employment of psychokinesis to bring the plot to a conclusion is hardly satisfying. The message being given to children that good can triumph over evil is welcome, but resorting to mind control only works in a warped fairy tale from the mind of Roald Dahl. How they are supposed to deal with evil in real life remains an enigma.

Kudos to Michele Ney for a great set design and Jen Young Mahlstedt for meticulous choreography. As for Trunchbull’s audacious costumes, one can only have admiration for Susan Branch Towne.