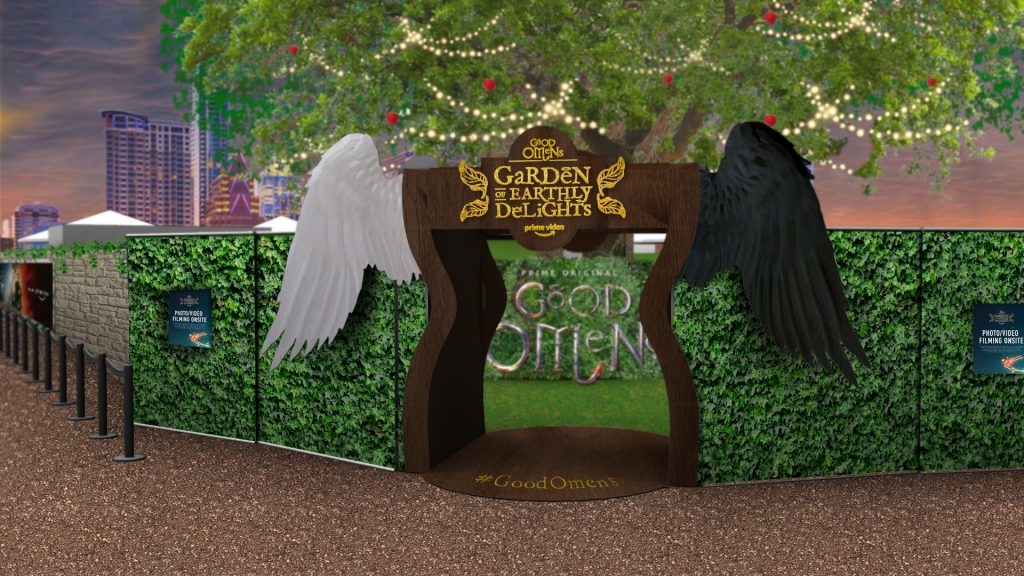 South by Southwest is about to begin, and the highlight this year will be Good Omens. It is an upcoming TV series based on a 1990 book, and will star David Tennant of Dr. Who fame.

From March 8 to 11, SXSW festival-goers and locals will be immersed in the Garden of Earthly Delights, a secluded oasis from the impending End that will bring to life the world of Good Omens. The activation will include a “secret” garden featuring a massive, 20+ foot tree at the center that serves premium wine and beer out of its trunk, a Hellhound Puppy Pen where guests can adopt their own furry friends, a pop up of A.Z. Fell & Co., straight from the book.

The Good Omens Garden of Earthly Delights carries out the spirits of the unlikely duo and transports guests into the world of the beloved book. Surrounded by a wall of lush foliage, the garden is free of charge and can be reached by entering through a massive winged hourglass on Driskill Street at 6th. The duality of the heroes’ friendship is ever-present in the space, from the moment guests step foot into the garden and are met at the entrance by angel and demon greeters.

The Good Omens Garden of Earthly Delights is bursting with worldly pleasures, including:

In addition to Tennant, co-author of the 1990 book will be in attendance. Neil Gaiman is the bestselling author and creator of books, graphic novels, short stories, film and television for all ages, including Neverwhere, Coraline, The Graveyard Book, The Ocean at the End of the Lane, The View from the Cheap Seats and the Sandman comic series. His fiction has received Newbery, Carnegie, Hugo, Nebula, World Fantasy, and Will Eisner Awards. American Gods, based on the 2001 novel, is now a critically acclaimed, Emmy-nominated TV series, and he has written and is the showrunner for the forthcoming mini-series adaptation of Good Omens, based on the book he co-authored with Terry Pratchett. In 2017, he became a Goodwill Ambassador for UNHCR, the UN Refugee Agency. Originally from England, he lives in the United States, where he is a professor at Bard College. See him March 9 at 330pm. Film screening will be Mar. 9 at 630 pm at the Zach. Neil Gaiman is joined by director Douglas Mackinnon and cast Michael Sheen, David Tennant, and Jon Hamm to give attendees the most in-depth look at GOOD OMENS to date and watch never-before-seen exclusive clips from the entire series. The six-episode series coming to Amazon Prime Video.