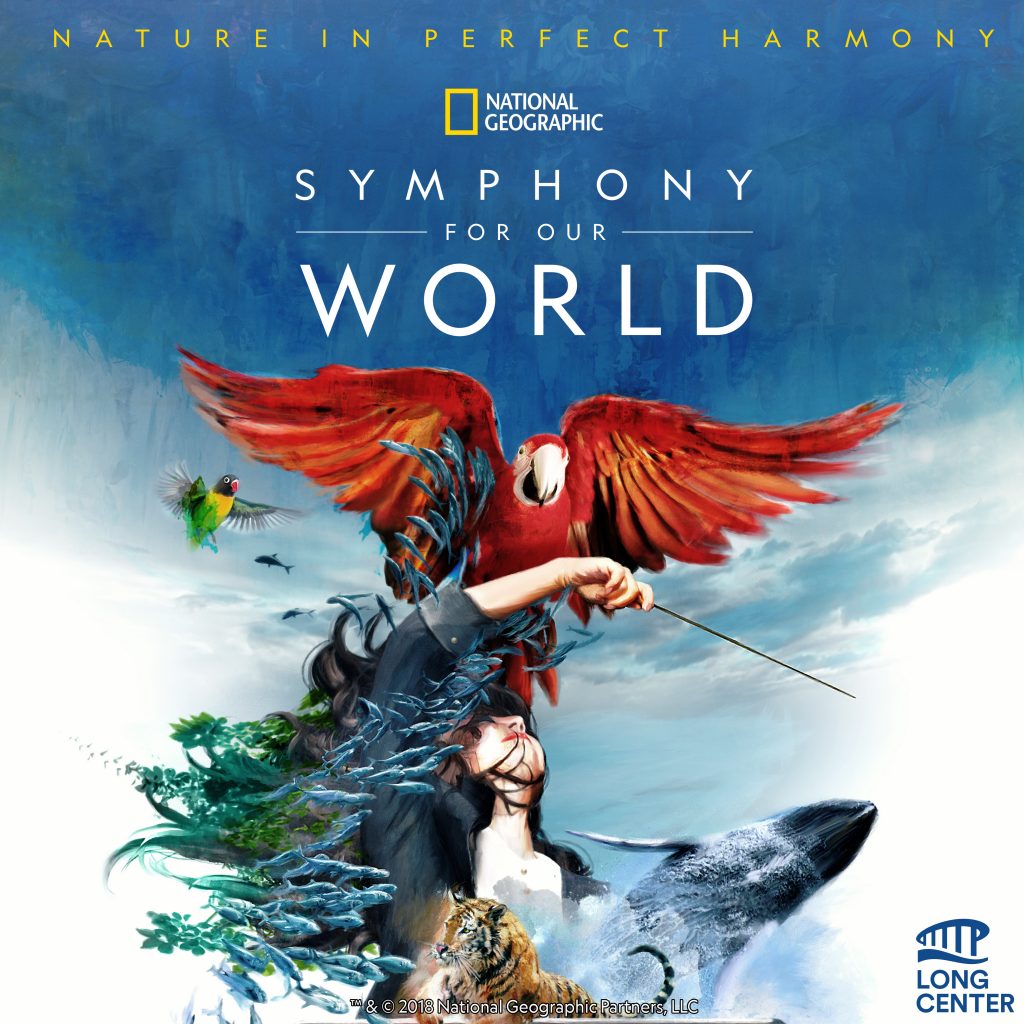 Gustav Holst is most famous for his symphony The Planets, composed just over a century ago. Notably absent from that symphony was the Earth! Holst wrote extraordinary music for seven planets, but omitted our own.

The years since 1962, when Rachel Carson wrote Silent Spring, have seen an awakening in human appreciation for our own planet and its fragile ecosystem. No symphonic score written in the 21st century could ignore Earth, which has been been the subject of 130 years of exploration by the venerable National Geographic Society. NatGeo, in collaboration with Jason Michael Paul, have addressed the lacunae in the musical aspect of that human appreciation by giving the world its own score. Symphony For Our World was performed in Austin on July 28, just its second performance after the world premiere in San Francisco on Earth Day this spring.

This is a combination audio and visual delight, with video and still images projected on a screen above the orchestra. The score is closely allied to what the audience sees on the screen, which makes the occasional live view of the orchestra on the screen all the more disorienting. When one tends to get ‘into the zone’ of appreciating the melding of sight and sound of the natural world, seeing musicians on the screen seemed to take away from the message NatGeo was promoting. I know the intention was to integrate the symphony into the experience, but it broke the mood that was successfully in play. That said, the Austin Symphony Orchestra under the baton of Kelly Corcoran did a smashing job with the demanding score by composers Austin Fray (from Colorado) and Andrew Christie (from Australia), who have collaborated on several projects.

In an exclusive interview for Sun News Austin, Mr. Paul modestly said of his collaboration with NatGeo that “I was in the right place at the right time. This is totally NatGeo’s vision, it’s as ‘first-party’ as you can get- I’m just facilitating. This concert takes you to places only NatGeo can take you. From the overture to the end we take you on National Geographic’s journey over 130 years in just 90 minutes.”

The five-movement score at the heart of the performance given in Austin was heard by a wide audience on April 22 this year. In addition to being performed in San Francisco, it also served as the soundtrack of a television special aired that day. “Earth Day was a huge step forward,” Paul said. “We were thinking of using masterworks but we had a body of five movements.” Fray wrote the movements for The Sky and the Sea, while Christie wrote Mountains and Shore. The symphony concludes with an Overture, which is normally the first part of a composition.

Also in attendance at the Long Center in Austin was Valerie Perry from NatGeo. She told me the production “came down to a story we’re going to tell.” Even though views of nature tell their own story, the message is reinforced by brief clips from marine biologist Dr. Sylvia Earle and Joel Sartore, who is creating a “Photo Ark” for NatGeo.

“Dr. Earle is the world’s most passionate advocate for the oceans,” explained Perry, “and the photography of Sartore introduces the audience to species not widely known. He gives equal weight to both small and large creatures, so that we get to look that creature in eye, and give them the respect they deserve.”

In her remarks, Earle says that “everything connects. We need to treat the oceans as if our lives depended on it, because they do.”

Perry said you don’t have to be a music critic or an environmental activist to appreciate Symphony for Our World. “You just have to be curious. The core of NatGeo is bold, curious people. In the communal setting of a concert hall, we are with like-minded people so the energy has a real feeling to it.” The audience response was predictably enthusiastic, but the greater challenge is when and how to bring this audiovisual message to those who are not choristers of the environmental movement. President Nixon famously did not attend the opening of the Kennedy Centre for the Performing Arts because Leonard Bernstein’s Mass was said to contain subversive messages. Anyone who thinks the current inhabitant of the White House will be attending any upcoming performances of this symphony are likely to be sorely disappointed, probably for the same reason.

Concert hall audiences are being treated to the symphony plus other music that is in effect modular. Upcoming concerts may see some of these eliminated or possibly replaced by others. In addition to the five symphonic movements that end with an overture, the concert begins with an overture that incorporates the famous Elmer Bernstein theme for National Geographic. Following the overture are several pieces by the early 20th century French composer Maurice Ravel. For example music from his 1912 ballet Daphnis and Chloe is played as we see images of famous ancient sites such as the Pyramids. Other elements we witness with Ravel as a soundtrack range from blooming flowers to a celebration of human endeavours that ends with a warning of the perils of pollution. As Perry told me, “NatGeo is always about entertainment with a purpose.”

As with any symphony, each individual will have their favourite parts. For me, the magisterial mystery of the Sea in the first movement, as expressed by the 19-member Chorus Austin lending their voices to the music of the Austin Symphony, was a highlight. The obvious delight of manta rays jumping into the air for a glimpse of what is above their seaborne lives was a joyous conclusion to the Sea movement. It evokes man himself going into space, which was shown in several clips in the Sky movement, briefly poking his head above the surface of the Earth for a glimpse of what is above and beyond. The Chorus also beautifully evoked the aerial wonderment of the flight of birds in the Sky movement, the very creatures who inspire mankind to take flight to the stars.

The next performance of the Symphony for Our World in the U.S. will be October 27 in Los Angeles. This follows a tour to Australia and Kuala Lumpur. Several visits to Canada follow in November. For a full schedule of the worldwide tour, visit this website: https://natgeo-symphony.com/pages/schedule

Excerpts from the Symphony can be heard at this site:
https://natgeo-symphony.com/pages/listen

Photo of Mr. Paul is by C. Cunningham