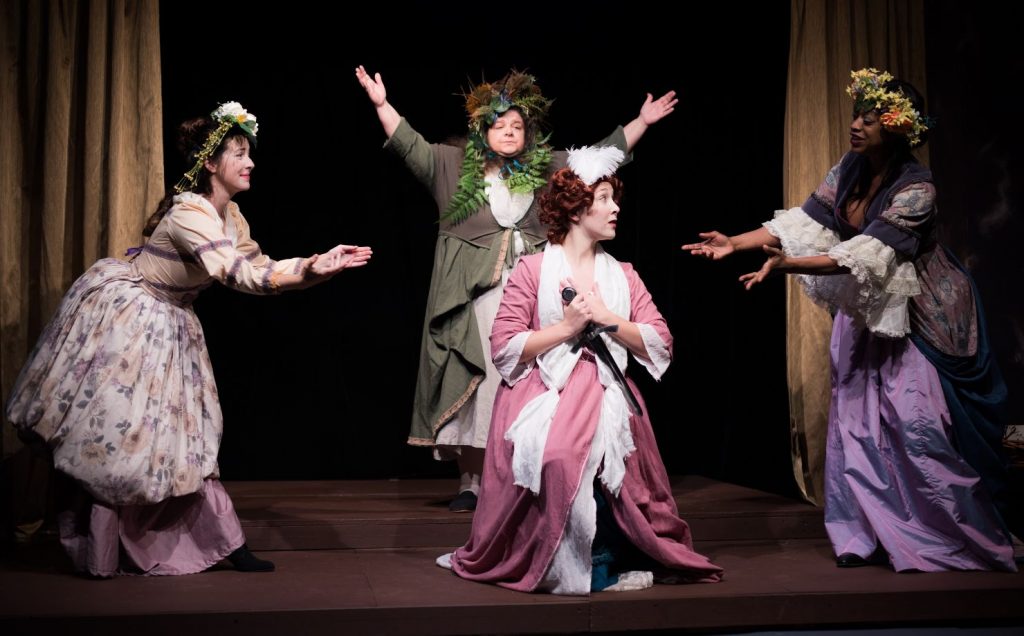 “It was as if the men and women gathered there had witnessed a miracle.”

So says the character Mrs. Betterton in Playhouse Creatures, currently being performed at The City Theatre in Austin. The line comes from a soliloquy that is very special to the director of this play, Lindsay McKenna.

In an interview, she told me it is the “most favourite female monologue I have ever encountered.” To understand what Betterton, played with grace by actress Valencia Lee, is referring to requires a short history lesson.

Playhouse Creatures is set in 1663, shortly after Charles Stuart became king of England as Charles II. He had lived most of his life exiled on the Continent, where he whiled away many hours watching theatrical performances. There, women were able to play themselves. In the days of Shakespeare, female roles were played by men, it being thought unseemly for a woman to be on stage. When Charles became King, he changed the rules.

Mrs. Betterton can be heard reminiscing about her early days when she sometimes dressed as a man and actually performed surreptitiously in several plays, put on by her husband (who is never seen but much talked of). “I had tasted a forbidden fruit,” she sighed, alluding to Eve and the apple. The first authorised performance by females is the ‘miracle’ she talked of.

“She played men who have all the power in the show,” McKenna explained, “but after being allowed to play female roles she was typecast, not allowed the full expression of her personality. She was still constrained after playing a woman and could only identify with one female role: Lady Macbeth, who did have power.”

The high point of the play is when Mrs. Betterton seems consumed by the madness of Lady Macbeth as she finds herself an unwanted actress who must make way for a younger generation. A great performance by Lee.

Essentially a feminist play (in this case about real-life women from the 1660s), it speaks to current feminist causes. McKenna said all the fuss about the director of the recent Wonder Woman movie was a case in point. “There shouldn’t be an issue about a woman directing. There is still a disparity in men versus women playwrights and directors. There are still things that have to be overcome, but it’s up to the individual to decide their approach.”

I found the play itself (which dates from 1993) to be a series of loosely connected vignettes. I have to agree with a 2007 review in the London newspaper The Guardian, which says “the narrative threads are too fragmented to make us care.” The character Doll in the play beseeches “critics find some sweet flavour!” But it’s hard to do in this case. This is unfortunate as the play has a lot to say both about the 17th century and the 21st century.

Despite the shortcomings of playwright April DeAngelis, the acting was superb. Lori Z. Cordova is a jewel, and DaShantanaya Lee (as Nell Gwyn, who captured the heart of the King) sparkled in her live theatre debut in Austin. The other cast members were all on the mark as well: Jesselyn Parks, Darren Scharf, Michael Rodriguez, Hannah Enright, Paige Breese and Rhiannon Monet.