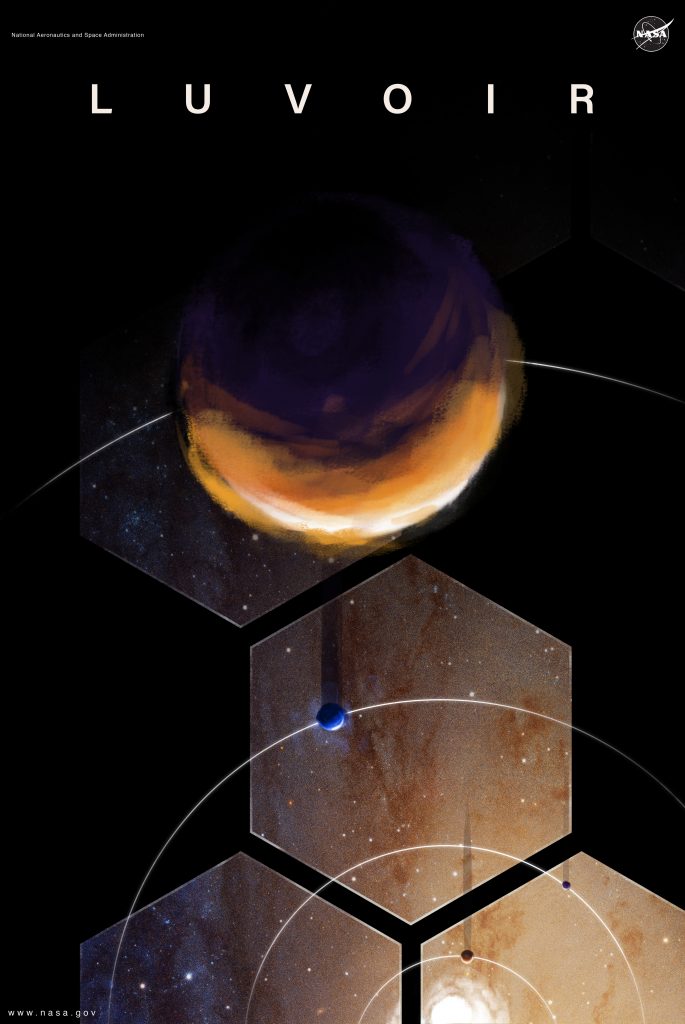 No one can predict what discoveries will be made in the 2030s, but we can say with some certainty what space-based telescopes will be used to make those discoveries.

That is the subject of many papers being presented this week in Austin and an international telescope conference. It typically takes 20 years between the time a project is outlined until the time it actually goes into orbit and starts taking data. The new Space Telescope, due for launch in 2019, is a case in point. To learn more about this, read my article posted June 11, 2018: http://sunnewsaustin.com/2018/06/11/we-are-not-alone-nobel-laureate-in-austin/

Currently four orbiting telescope projects are under development for consideration by NASA, which will review them all a year from now. Some are more expensive than others, some have more political clout, some have more compelling scientific payoff. All these considerations and more will play a part in the final selection process – only one will be built and sent into orbit.

Representatives from each of the four missions presented their own compelling cases at a session held on June 11, the second day of the 6-day conference being held at the Austin Convention Center. Dr. Scott Gaudi spoke about The Habitable Exoplanet Imaging Mission (HabEx), whose mission, he said “is to seek out new worlds and map other planetary systems. It will be possible to directly image planets” orbiting other stars, he said.

To do this the light from those stars must be masked, so the much fainter reflected light of whatever planets they may have is not overwhelmed. To this end engineers envision a starshade some 72 metres in diameter. By placing it 124,000 km from the telescope, it will appear just the right size to block out starlight, thus enabling planets shining at an extremely faint 30th magnitude to become visible.

Gaudi said they originally said it “is like detecting a firefly a few feet from a searchlight at a distance equivalent from New York to LA. Actually it is 1,000 times harder than this!”

HabEx will, if built, do a broad survey of 100 stars, and a deeper survey of just 9 of them. These include stars already known to have planets orbiting around them, such as tau Ceti, 61 Cygni A and 40 Eridani. The tell-tale sign of life, or a biosignature as it is called, would be a detection of oxygen and methane, but it appears HabEx will be unable to measure the presence of these gases in planetary atmospheres.

Another probe, dubbed the Origins Space Telescope, is envisioned to have the same surface area as the new Space Telescope, 25 square metres. It wants to address three main questions. First, are we alone in the galaxy? How common are Earth-type planets around stars classified as M dwarfs, which constitute 75% of all stars within 15 parsecs of Earth. Margaret Meixner made the case for Origins, who expects the probe will locate 20 nearly terrestrial exoplanets.

Its second goal, she said, was answering “how do conditions for habitability develop during the process of planet formation? Origins will survey 1,000 planet-forming disks to measure their total gas mass and water. Then 200 of these disks will be studied further, to measure their distribution of water and gas.”

Finally, Origins will study how galaxies form stars, grow their central black holes, and make heavy elements. It is these heavy elements that are contained in our own bodies, so they are essential for intelligent life as we know it.

While these two projects are primarily focused on the search for planets similar to Earth (and ultimately life elsewhere), the LUVOIR surveyor will have a smaller portion of its time devoted to imaging exoplanets. Capable of studying objects in ultraviolet, optical and infrared, its project scientists are considering either an 8-metre or 15-metre segmented mirror. Selection of LUVOIR with a small mirror is unlikely for a once-in-a-decade mission, known in the astronomical community as a flagship mission.

Dr. Matthew Bolcar gave an overview covering a “range from solar system to galactic work.” This includes galaxy formation and evolution, star and planet formation, and a look at the early stages of the universe known as the epoch of reionization.

Finally, Jessica Gaskin spoke about an X-ray observatory known as Lynx. “It will be capable of directly observing high energy events that drive the formation and evolution of the Universe,” she explained. It will also increase our understanding of the “beginning and endpoints of stars.” The endpoint of large stars is an explosion, making a nova or supernova. “These violent events increase the temperature of the surrounding medium and will be visible in X-rays.”

With a resolution 50 times higher than the Chandra X-ray telescope launched in 1999 (named after Nobel laureate Dr. Chandrasekhar, who I had the honour of having dinner with), Lynx will let us see the dawn of black hole formation and let us probe the invisible drivers of the formation of galaxies.

Each worthy in its own right, one of these four missions will lead the way to discoveries in the future.

Featured photo: Poster for the LUVOIR mission, courtesy of NASA.
The conference in Austin is being held by SPIE (www.spie.org)