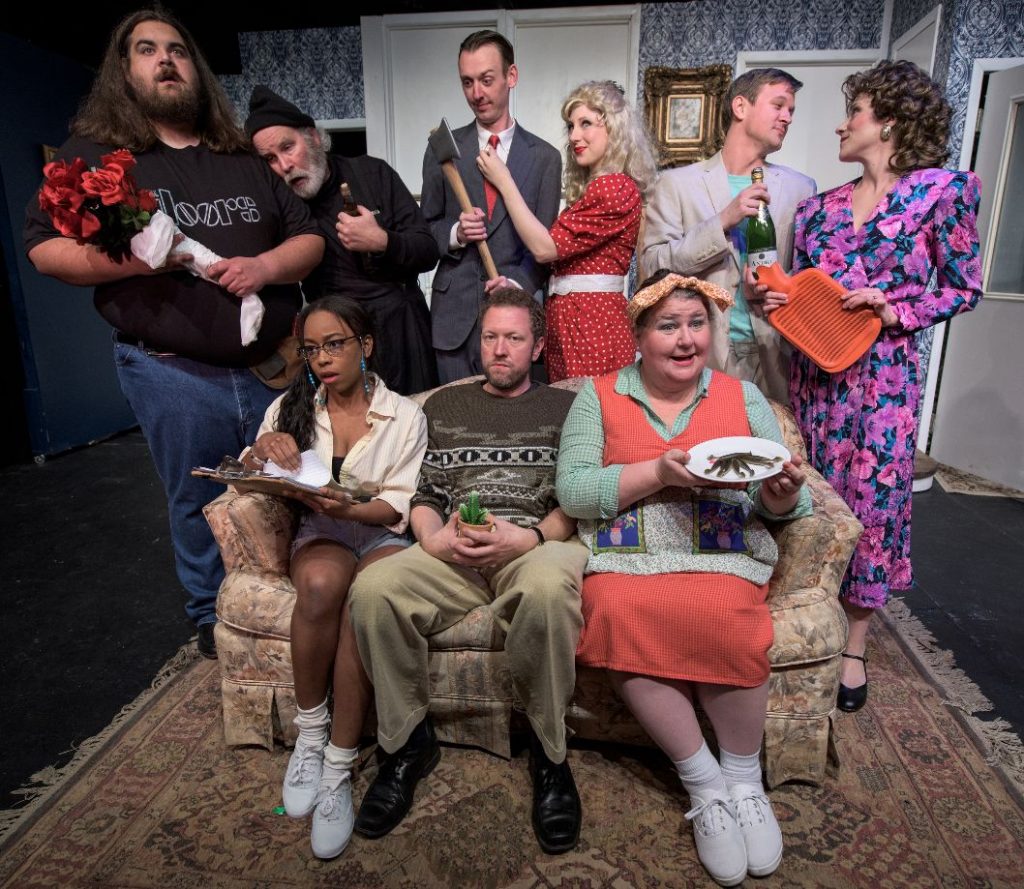 Never have sardines played such a major role in a play, but that is not where the ‘smell of the theatre’ originates from in this classic British mapcap comedy from 1982 by playwright Michael Frayn (now 84).

The line is spoken by the old codger of the play, Selsdon, portrayed like rough sandpaper by Sean Hennigan (he played a different role in the same play 32 years ago). “Sixty years now,” growls Selsdon, “and the smell of the theatre still haunts me.” This is actually a play within a play: the ensemble cast is trying to give a decent performance of a sex farce entitled Nothing On. That is the real stinker, as they flounder to make sense of the direly written Nothing On, whose major prop is a dish of sardines that enters and leaves the stage with bewildering regularity. “I thought you were in Sardinia!” is one of the play’s best lines.

Noises Off is the actual play theatre goers see. It is divided into three acts. The first features a set consisting primarily of doors that variously open, slam, or jam as the nine characters move on and off stage. The second act is a complete turnaround: quite literally so, as the stage is reversed so that we see backstage. Virtually the entire first act is repeated, only this time with the actors largely miming while they are ‘backstage’. We hear the dialogue as the actors in the sex farce speak to a supposed audience on the other side of the set. The third act returns us to the front of the set, showing how the farce has degenerated after being on the road for two months: the actors can barely get through it.

A bow by the cast to the stage set at the conclusion indicates just how important it is. Artistic Director Andy Berkovsky told me that for the first time ever in its 12-year run, the set for a play by  City Theatre Austin was built off-site. This happened over a period of a month, and while it was being installed “we had a dark week” at the theatre which is very rare. “The challenge was not so much rotating the set as the fact all the doors had to be able to work.” Kudos to Kakii Keenan for her work on the set, which was certainly a challenge to create in such a small space. 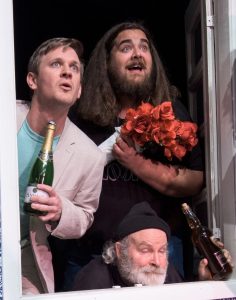 “This show is beyond the help of a director,” says Darren Scharf as the supposed director of the sex farce. His character, Lloyd, begins by barking commands from the audience, thus immersing everyone in the production of this dual play.

Even though I spoke to a millennial in the audience who thought the production was “hilarious,” the frenetic pace of the play is such that the audience scarcely has even a moment to laugh out loud in 2 1/2 hours. I can only remember perhaps three moments that elicited an audible response from the audience, making this a truly unusual comedy.

The timing of the play is crucial. If the actors got lost in the chaos then it would have become a madhouse, but this tight ensemble cast performs the perfect high-wire act, making it an enjoyable if exhausting experience.

Members of the cast, who all deserve great credit, include Brent Rose (whose tall, thin frame is used to great effect in Harold Lloyd-like contortions); Stacy Trammell (as the dumb blonde), Kevin Anderson (the handsome leading man whose Achilles heal is nosebleeds); Web Jerome (a production assistant with a crush on the director); Mike DiChello (assistant to the director), Robyn Connors (the Cockney housekeeper whose confused mirth is a constant of the play), and Susanna Hill (who wants nothing more than a quiet weekend with her husband, played by Anderson). A quiet weekend this is not, but if you enjoy a play with lots of things going on, this is a production not to be missed.

Noises Off continues to March 11, 2018. Visit the website for tickets: